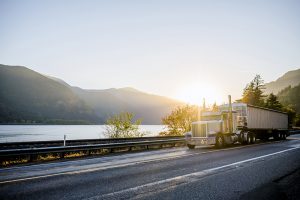 A convoy of transport trucks is en route to Ottawa to protest vaccine mandates against cross-border drivers. (Adobe Stock)

OTTAWA — A federation representing truckers across Canada has denounced a series of planned protests against the federal government’s cross-border travel vaccine mandate, arguing such demonstrations aren’t a safe or effective way of resisting the policy.

The Canadian Trucking Alliance spoke out against the pending protests in a statement issued 24 hours before a convoy of unvaccinated truckers was set to leave British Columbia en route to Ottawa. They will be joined by fleets of other drivers from across Canada in the Nation’s capital on Jan. 29, where they plan to hold a rally decrying policies that require drivers to be fully vaccinated against COVID-19 in order to cross the Canada-U.S. border.

“The Canadian Trucking Alliance does not support and strongly disapproves of any protests on public roadways, highways, and bridges,” the statement read. “CTA believes such actions — especially those that interfere with public safety — are not how disagreements with government policies should be expressed.”

The “vast majority” of Canadian trucking industry members are vaccinated, the alliance said, noting the immunization rate among truck drivers is on par with that seen among the general public.

Alliance President Stephen Laskowski called for still greater compliance in light of the fact that both Canada and the United States have cross-border vaccination rules in place.

“This regulation is not changing so, as an industry, we must adapt and comply with this mandate,” Laskowski said in the statement. “The only way to cross the border, in a commercial truck or any other vehicle, is to get vaccinated.”

Those opposed to the measure, however, were unmoved.

“We’re not backing down and we are going to Ottawa,” Tamara Lich, a protest organizer from Medicine Hat, Alta., said in a Facebook Live video posted on Sunday.

Organizers describe the vaccine mandate as an example of political overreach resulting in economic harm, arguing the policy hurts small businesses and denies some workers the means to survive.

A GoFundMe page set up by organizers had garnered $2.6 million in donations, with more than half that total coming in the past 48 hours. The money will go toward the cost of fuel, food and accommodations for participating protesters, according to the fundraising campaign page.

Up to 26,000 of the 160,000 drivers who make regular trips across the Canada-U.S. border would likely be sidelined as a result of the vaccine mandate in both countries, according to the Canadian Trucking Alliance and the American Trucking Associations.

Some 30,000 trucks roll across the border each day hauling nearly $850 million in freight, according to 2020 figures from the U.S. Bureau of Transportation Statistics.

The Liberal government announced in November that all Canadian truckers looking to cross the border from the United States would need to be vaccinated in order to avoid a 14-day quarantine, a policy that came into effect on Jan. 15.

The mandate came into effect despite a previous statement from the Canada Border Services Agency that said unvaccinated and partially immunized truck drivers crossing into Canada from the United States would remain exempt from the mandate announced about two months before it came into force.

The federal government reversed itself again the next afternoon with a statement that said the information shared the day before had been sent “in error.”