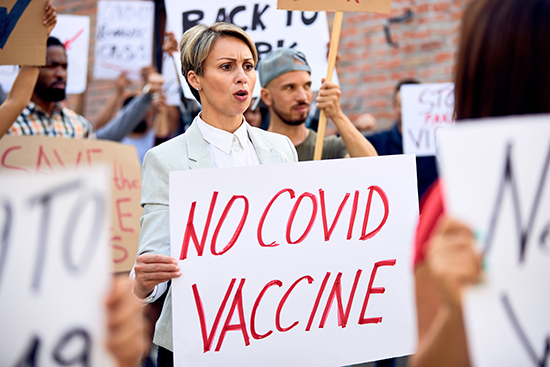 Politicians around the world are torn between pressure to implement vaccine mandates and the danger of further fuelling social division and protests.

When COVID-19 arrived, the carrot dangled to citizens was that once the majority of them were vaccinated, life would return to normal. Some governments offered incentives and prizes to encourage vaccination. In Moscow, draws for cars were held while Londoners had the chance to win tickets to football matches.

However, the rise of COVID-19 variants, along with the waning of the protection offered by vaccines against infection, meant that the pandemic continued even in countries where the majority of the population had received their shots.

Politicians then turned to sermons, with appeals for all citizens to get vaccinated, along with their children. Public health officials like Anthony Fauci in the United States were thrust into the headlines as advocates of vaccines and vaccination. But even today, the preaching and education are still failing to sway enough holdouts to get jabbed.

Next, politicians turned to sticks by instituting vaccination mandates. Mandates are orders for citizens to act at the behest of governments; for the most part, they’re not laws passed by legislatures. Mandates of any kind are controversial, and particularly so when implemented rapidly and designed to swiftly change individual behaviour.

Even in countries with high vaccination rates, like South Korea, the recent vaccine mandate to enter supermarkets has been extraordinarily divisive.

Vaccine mandates aren’t decrees for citizens to roll up their sleeves, but rather rules that restrict the activities of those not vaccinated. In other words, they penalize those who don’t comply. The penalties involve preventing access to workplaces and restaurants, travel and other activities.

Unlike carrots and sermons, the problem with mandates is that, inevitably, exceptions are sought by particular groups or people.

Serbian tennis star Novak Djokovic’s recent deportation from Australia, for example, was the culmination of a public saga involving the legal and political interpretations of that country’s vaccine mandate.

The effectiveness of mandates as a strategy to encourage the final group of holdouts to become vaccinated has always been problematic.

The World Health Organization hasn’t recommended vaccine mandates, labelling them as the “absolute last resort.” Mandates may change behaviour of individuals who are uncertain about whether to get the vaccine, but not of those with strongly held beliefs.

In late 2021, Greece made vaccinations mandatory for people aged 60 and older, but there was no enforcement. In early 2022, the Greek government announced a 100 euro fine for those not yet vaccinated, but it’s also unclear how those fines will be enforced.

Italy, where almost 75 per cent of the population is vaccinated, has made getting the jab compulsory for everyone over the age of 50.

In France as of mid-January, all adults must be fully vaccinated to enter restaurants, cinemas and other public venues. Unlike vaccine mandates in many other countries, this mandate is a law passed by the National Assembly, not an order issued by the French president. However, there is no government vaccine mandate for most workplaces in the country.

In the U.S., the Supreme Court blocked President Joe Biden’s mandate to compel businesses with more than 100 employees to require workers to be vaccinated or tested.

The court ruled that although the Biden administration has the authority to regulate occupational dangers, it does not have the power to regulate public health more broadly. Only Congress has this power, the Supreme Court justices said, in the form of new legislation.

Austria plans to fine those who have not met the mandatory vaccination requirement up 3,600 euros every three months. But, again, there’s no indication of how this will work in practice. In Canada, Quebec has proposed a substantial tax on unvaccinated adults, again with few details.

The fines and taxes being proposed are trial balloons that cannot reasonably be implemented or enforced. In any case, they are likely to be found unconstitutional by the courts.

These trial balloons suggest politicians are recognizing that mandates won’t change the minds or behaviour of those who remain unvaccinated. French President Emmanuel Macron admitted as much recently with his comment that his aim now is to hassle and annoy the unvaccinated.

Having exhausted the policy tools available to change individual behaviour, politicians now ponder next steps. It may be that little can be gained from additional vaccine mandates and related punitive measures other than weakening social cohesion.

Political leaders may well consider returning where they began: looking at carrots rather than sticks, and making vaccination attractive to the holdouts rather than punishing them.

Thomas Klassen does not work for, consult, own shares in or receive funding from any company or organisation that would benefit from this article, and has disclosed no relevant affiliations beyond their academic appointment.