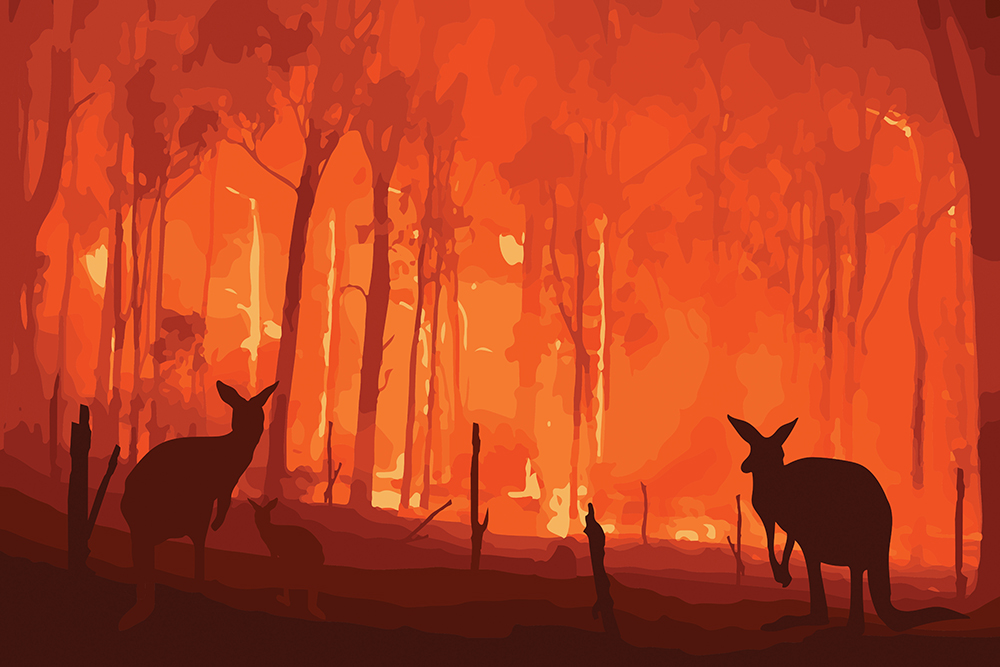 A barrage of bad news — including coverage of the Australia wildfires — is affecting young workers’ mental health. (lllonajalll/Adobe Stock)

(CP) — Anxiety and apathy have both come easily to Galen Watts so far this year.

The PhD student at Queen’s University has watched with a mix of dismay and detachment as headlines about rampant wildfires in Australia and the threat of imminent war between the United States and Iran flooded his screens. The bad news intensified last week, with word that the American-Iranian tensions had escalated to include a missile attack targeting U.S forces in Iraq and hours later a deadly plane crash near Tehran that killed 176 people, including at least 57 Canadians.

But Watts’ reactions to the bleak headlines felt muted after three years of dramatic emotional shifts between resignation and outright fear.

Watts, 30, said the latest raft of troubling global headlines marks another ride on the seesaw he and many of his fellow millennials feel they’re riding. The constant barrage of bad news and urgent commentary, he said, has left him questioning the validity of his emotional reactions.

“I can’t tell whether I’m being alarmist or whether we are actually in a very alarming time,” he said in a telephone interview from Toronto.

Social media is rife with both young Canadians expressing open angst about issues such as politics, climate change and economic instability, as well as voices quick to denigrate them for what is perceived as unjustified fearmongering.

A common theme among those critiques is the sense that past generations have faced and overcome comparable global crises and that those currently in the early stages of adulthood lack perspective on the struggles before them.

But Henry Giroux, chair for Scholarship in the Public Interest at Hamilton’s McMaster University, dismisses such characterizations as an overly simplistic reaction to what he describes as a complex and unprecedented set of circumstances young Canadians are contending with.

Giroux said millennial malaise has its roots in political and economic policy directions first established as far back as the 1970s, ultimately leading to a job environment that offers young workers few opportunities for stable, fairly compensated jobs.

The rancorous politics of recent years, combined with the growing threat posed by climate change, create a fear that Giroux finds entirely justified.

He said that while past generations have undoubtedly faced down challenges, their successes should not be used to drown out a new generation’s fears.

“That may be true, but that doesn’t in any way tell me anything about the seriousness of the historical moment in which young people find themselves today,” he said. “Simply saying that these are generational issues fails to identify what the issues are.”

Recent research has attempted to document the heightened negativity millennials report, with the spring 2019 edition of the National College Health Survey painting an especially stark picture of mental health deterioration over the past few years.

Dr. Katy Kamkar, a clinical psychologist with the Centre for Addiction and Mental Health, attributed part of the spike to increased education around the importance of discussing and seeking treatment for mental health conditions, but said personal and societal issues also play a role.

Kamkar said millennials across the spectrum struggle to grapple with a host of concerns ranging from individual debt levels and dubious employment prospects to political stability and the state of the environment.

“A lot of things going on in our society, all those can contribute to a lot of uncertainty, a lot of worries and anxiety,” she said.

Watts blames social media for some of the pervasive discontent, saying most platforms perpetuate echo chambers that amplify distressing messages while shutting out perspectives that may bring more nuance to the topic at hand.

He said the perpetual sense of “vague outrage” he encounters has at least one positive effect by motivating his generation to engage and take action on issues like climate change rather than sinking into apathy or despair.

But he said the constant urgency winds up giving some issues intense focus while giving others short shrift.

He cites subjects of race and gender as examples, noting that while he feels they are important and worthy of discussion, they have eclipsed matters related to class and economic inequity that he believes to be equally deserving of attention.

Watts said the most recent barrage of concerning headlines will do little to ease his generation’s concerns.

“We rarely have opportunities to talk about issues in a non-outrage mode,” he said. “We are either yelling on Twitter or Facebook, or leading our day-to-day lives, free of an awareness of larger issues. I liken this dynamic to having headphones which only have one volume: really, really loud.”