Opening schools should be a priority, but Omicron requires extra safety: experts 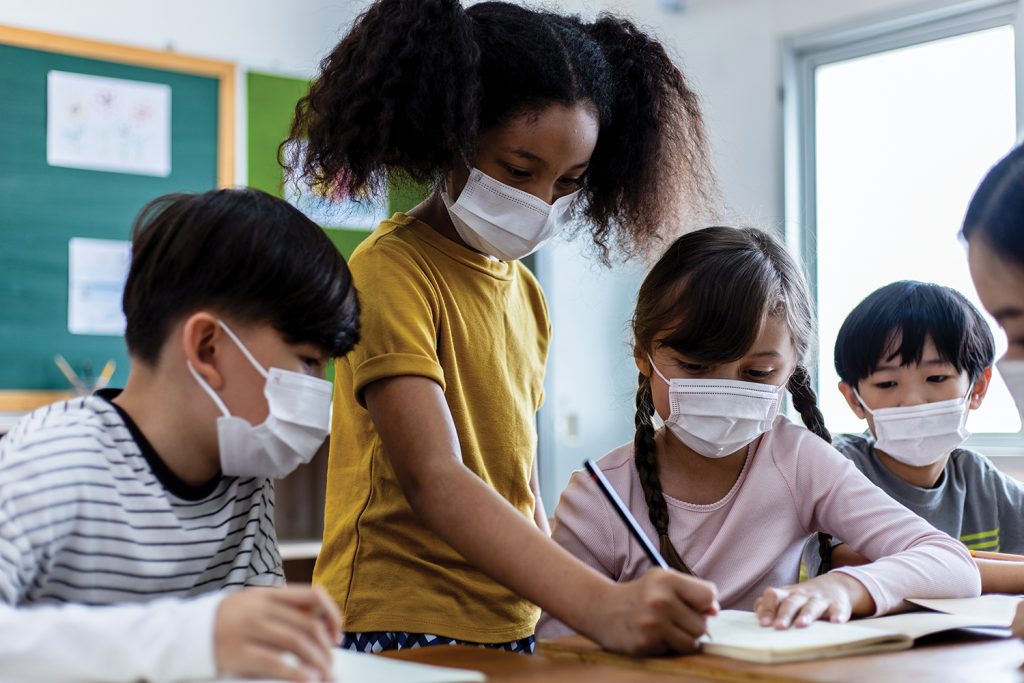 Decisions on schools have been fraught through most of the pandemic, with some experts urging they be kept open for mental health and social development as well as academic reasons. (JR-50/Adobe Stock)

As Saskatchewan welcomed students back to in-person learning this week, Dr. Ayisha Kurji sat her grade-schoolers down to discuss ways to keep them as safe as possible.

Some parents in Saskatchewan — the only province to not delay classes after the holiday break — chose to keep their kids home but Kurji sent hers back, feeling confident her family had done its best to shield against an Omicron-fuelled surge that has shuttered most schools across Canada.

“We need to recognize that kids have paid a huge price in the pandemic and we see the impact that’s had on them,” said the pediatrician and assistant professor at the University of Saskatchewan, who ensured her kids were fully vaccinated before school resumed to give them an extra layer of protection.

“Now that we have that information, we really do need to put our kids first. (But) we need to make sure it’s safe to go back to school.”

Debate persists over the role schools have played in COVID-19 transmission, and strategies vary coast-to-coast over whether to offer in-person learning or virtual classes, and for how long.

Most provinces delayed in-person learning by at least a week, while Saskatchewan held firm on keeping schools open.

Dustin Duncan, Saskatchewan’s minister of education, said Wednesday the province was in a “good position” after the Christmas break, but noted Omicron’s rapid spread could change things.

Alberta said kids would return to class Monday, while Manitoba is set to resume school online next week then bring students back to class Jan. 17. Ontario, meanwhile, has begun 2022 with two weeks of virtual learning.

Decisions on schools have been fraught through most of the pandemic, with some experts urging they be kept open for mental health and social development as well as academic reasons.

Provincial health officer for British Columbia Dr. Bonnie Henry said in a news conference Tuesday that schools are “not a major source of transmission.”

But other experts say schools need to take extra care against the highly transmissible Omicron variant.

Dr. Nitin Mohan, a public health expert with Western University, said there isn’t a “large or consistent enough data pool” to show whether Omicron might easily spread in classrooms, partly because the variant is still so new.

Some European countries, including Germany, Denmark and the Netherlands, closed schools last month as Omicron surged there, while parts of the United States are mulling school closures to curb their sharp spike.

“Right now I think a cautionary approach is the way to go,” Mohan said, adding that the stress Omicron has placed on health-care systems is another reason to delay in-person learning and introduce other restrictions.

“You look at it from a macro level — can children get the virus? Yes. Can they spread it? Yes. Are they in poorly ventilated places in close contact with one another? If that’s the case, I think we shouldn’t be surprised to see the virus transmitted from this population.”

Kurji said school transmission has been “absolutely part of the spread” throughout the pandemic, but it hasn’t accounted for the majority of cases.

If provinces delay in-person learning, she said they should also restrict other areas of life, which many have done.

“If we’re not tackling spread (in the community), it’s unrealistic to expect that closing schools is going to solve the problem,” she said.

As COVID-19 cases have risen in Canada, more children are becoming infected.

Data from Public Health Ontario from the last two weeks of December showed case rates among the five-to-11 and 12-to-19 age groups represented the second- and third-highest in the province, behind those ages 20 to 39.

Experts say severe disease remains rare in children, but some kids can get sick enough to require a hospital stay.

CDC data from the U.S. showed a 66 per cent increase in pediatric admissions at the end of December compared to the previous week, which Kurji attributes to “a numbers thing.”

“The more kids getting infected, the more kids will end up in the hospital,” she said. “But I can’t say for sure that there isn’t something different about Omicron in kids.”

Experts say that even if Omicron tends to produce more mild illness than the Delta variant, rapid spread could still overwhelm hospitals.

Beyhan Farhadi, an education researcher with York University, suggested the delay for in-person learning is partly logistical. She said staff shortages are expected in schools where teachers are exposed or infected and therefore must isolate.

Delays only makes sense if jurisdictions use that time to make schools safer, she said, advocating for improved ventilation in classrooms, better masks for students and teachers, prioritizing the vaccine for children, and enacting measures like paid sick leave so parents can properly isolate if they or their kids become infected.

“The question of whether schools can stay open will be determined by what (governments) will do to get those basics in place,” she said. “I don’t know whether that’s going to happen.”