‘I’m just exhausted’: Inside a Toronto hospital during Omicron

With no end to the pandemic in sight, staff say they are barely hanging on — they are exhausted, demoralized and frustrated 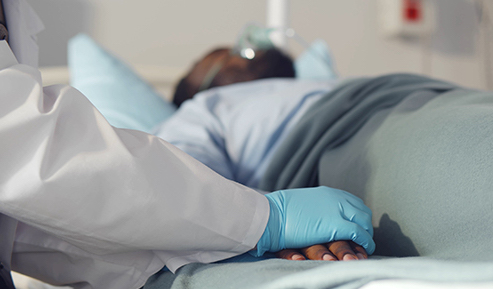 The highly-infectious Omicron variant hit hard in December, leading to a dramatic spike in hospitalizations across the province and severe staffing crunches. (nimito/Adobe Stock)

TORONTO — Paula Abramcyzk sighs at the unknown her day will bring. Odds are, in the heart of the Omicron wave, someone will die in the intensive care unit at Humber River Hospital in Toronto.

The ICU social worker is exhausted. It’s 9:37 a.m. on a Tuesday in January.

The 48-bed ICU on the sixth floor is quiet at the moment. Most of the patients are in induced comas; many are intubated. More than half have COVID-19.

Abramcyzk’s job is to support families once a loved one gets into the ICU. She guides them through the complex medical journey, including death.

Numerous families have asked her to help them convince doctors to alter death certificates so that it doesn’t say COVID-19, she says.

“They want autopsies because they don’t believe in COVID,” Abramcyzk says, shaking her head.

Nearly two years into the pandemic, staff at the northwest Toronto hospital say they regained some semblance of normalcy in the fall when the Delta wave of COVID-19 abated.

Then the highly-infectious Omicron variant hit hard in December, leading to a dramatic spike in hospitalizations across the province and severe staffing crunches.

The Canadian Press spent 12 hours inside the hospital, talking to dozens of nurses, doctors and respiratory therapists about how the latest wave is impacting them.

With no end to the pandemic in sight, staff say they are barely hanging on — they are exhausted, demoralized and frustrated.

Even brief reprieves are hard to come by. In a moment of calm on the sixth floor, Abramczyk dreams of taking a break, a short vacation.

Then she snaps out of her reverie when she gets word that a patient has died. (The Canadian Press later learned the patient did not have COVID-19.)

“I can’t take much vacation,” Abramcyzk says. “It’s too busy.”

She leaves to make some calls.

At 10:58 a.m., Tenzin Dhasel, sits down at her computer, which faces a window into her ICU patient’s room. Like other registered nurses, shemonitors the data spit out from the gaggle of wires and tubes connected to each patient.

Dhasel has just finished helping eight other colleagues flip a patient from back to front, a process called proning, which helps oxygenate the blood — and is physically tiring for staff.

“It’s too much emotionally,” Dhasel says, of the pandemic. “It’s not easy seeing people dying every day.”

She is thinking about looking for a less stressful job because her mental health is in the dumps.

“It’s never been worse, I would say, but I cannot touch more on that because I get emotional,” she says as a few tears fall into her mask.

It’s 12:07 p.m. and Suzi Laj has been in meetings much of the morning, part of her usual routine to understand who is in the ICU. She is the manager of the east wing of the unit.

There are 43 patients in the ICU on this day and five empty beds, Laj says. There are eight more ICU beds — all full — on the eighth floor.

Laj says 28 patients have COVID-19. Fifteen are unvaccinated or only have one dose of a COVID-19 vaccine, while 13 have two doses. None have been boosted.

“We are seeing vaccinated patients that are coming to the ICU, but many of them are immunocompromised or have other comorbidities,” she says.

The major problem is staffing, she says. COVID-19, either directly or through an exposure, has taken nurses and doctors out of the rotation.

On top of that, several nurses have left the ICU during the pandemic, she says, for less stressful jobs. And a handful of nurses have retired.

“It’s emotionally exhausting to be there to support the patients, the families, but also the staff,” Laj says.

There is a high percentage of staff who are spiritual, she says, so every day they gather for a small, non-denominational blessing.

“We do what’s called a temperature check and see how everyone is doing,” Laj explains.

Up on the eighth floor, Julie Bourque slinks into a chair in the empty visitors area. It is 3:35 p.m.

She is the charge nurse of the east wing of the respiratory unit, where many COVID-19 patients who are in slightly better condition than those in the ICU receive treatment.

But those patients can crash and die quickly.

Bourque says she stopped counting COVID-19 deaths when they hit 60 in the first six months of the pandemic.

She commutes everyday from Barrie, Ont., which is about an hour’s drive.

“I spend a lot of rides home crying with stress,” she says.

The job is so demanding that finding time to drink water in the break room is difficult. She says they aren’t allowed water or cups near working stations during the pandemic.

“A lot of us have had problems with having chronic bladder infections because we don’t have time to drink, to pee, to hydrate ourselves,” Bourque says.

Many are also living with the trauma of the pandemic, she says.

“You can’t prepare yourself for watching people suffocate to death,” Bourque says.

“We’ve seen very young people gasping for air until their last breath and we’re the only ones there because family can’t be.”

The recent storm that dumped 55 centimetres of snow on the city left Bourque’s floor with little help. It took her six hours to get to work that day.

Nurses had to extend their 12-hour shift, which ends at 7:30 a.m., until noon because few could make it into the hospital, she says.

For several hours, she says, there were two nurses taking care of 32 patients. Once she and a few others got in, there was about one nurse for eight patients.

“We were just hoping that we don’t miss something, that someone doesn’t die because we couldn’t get to them fast enough,” Bourque says.

Thankfully, she says, no one died during that time.

But on any given day during the fifth wave, she says, the crew on the eighth floor is so busy that the priority is “life and limb” over comfort.

“We didn’t come into this profession to leave people soiled, to let people struggle and feel uncomfortable, but some days we have no choice,” Bourque says.

They’ll often save someone’s life, she says, then get yelled at by another patient for being inhumane.

She managed to get six consecutive days off recently: two vacation days tacked on to a weekend and two Christmas statutory holidays.

But then she caught COVID-19.

She wasn’t too sick, but she had to take care of several other sick family members.

It wasn’t much of a break.

“I’m running the halls here and I’m short of breath and getting chest pains and feeling dizzy and alone,” she says.

In the break room on the ICU, Joy Turner sprawls into a chair at 4:46 p.m., all four limbs splayed out like a starfish.

“It’s coming back in,” she says, her voice cracking. “You have to mentally prepare for the challenges you’ll face.”

Turner read the bible this morning. It helps. She hopes to one day hug her family again — she has limited herself to phone calls and driveway visits the entire pandemic, afraid of giving them COVID-19.

“Look at my eyes,” she says. “They’re red and they’re watering, but I’m not crying, I’m just exhausted.”

About 20 minutes later, a patient with COVID-19 dies.

A nurse walks out of the room, her head bowed, as she slowly pushes a bed. A sheet covers the patient, who is headed to the morgue.