Costs associated with incidents can be astronomical: expert

There are at least 50 golf course maintenance tasks that can be considered high risk, says one expert. (Mike Jiggens/Turf & Rec)

The actual cost of a golf course workplace injury can be astronomical when everything from damaged equipment and lost productivity to workers’ compensation and legal fees are factored in.

A health and safety consultant who has been working with golf courses for more than 25 years told superintendents in the spring there are ways to invest in accident prevention that are a fraction of the cost of being on the hook for an expensive payoff.

“Safety is cheaper than having an injury,” Sheila James, a consultant with Workplace Safety and Prevention Services (WSPS) said at the Canadian Golf Course Management Conference in Ottawa.

The return on investment for every dollar spent on health and safety practices is between $1.50 and $6.15, she said.

The process begins with the purchase of safe and reliable equipment that is maintained regularly. Equipment operators need to be trained to do proper circle checks on all equipment, big and small, James said. The potential dangers of all pieces of equipment need to be itemized in writing, she added.

“You need to have this in writing and need it for all high risk jobs and tasks.”

James shared a number of stories of golf course grounds personnel who were seriously injured because they failed to make the necessary checks or hadn’t been adequately trained.

One worker had replaced the disk on a handheld grinder, but failed to properly secure it in place. The loose disk came flying off and struck the operator, creating a gash that needed 25 stitches to close. The same disk then struck a co-worker, breaking his leg.

“You have to show workers how to put a new grind wheel on the equipment, and it should also be in writing.”

James said there are at least 50 golf course maintenance tasks that can be considered high risk, and each one requires a written safe work procedure. She acknowledged the task of putting all safety procedures into writing is “a huge job,” but added it’s a good project to undertake during the winter months.

If a course maintenance employee is injured on the job and the incident is investigated by the labour board, the board representative will want to see verification that proper training was provided and that the employee was made aware of the hazards of the job.

The costs associated with a workplace accident — both directly and indirectly — are high, James said.

A tractor rollover, for example, has to take into account damage to the equipment and the turf, the cost of the tractor being righted, the time it takes to right the tractor and remove it from the course, the cost to have paramedics respond to the injured worker, and the inconvenience the accident causes to golfers.

The indirect costs can be about four times more than the direct costs, she added, noting someone else on staff must complete the injured worker’s job. The substitute worker may already have a full array of tasks to perform and may require the training needed to fill in for his co-worker.

The longer the injured worker remains off duty, the more time will be required to fill out the necessary compensation paperwork. If the accident occurs at a smaller golf course that doesn’t have its own human resources department, the paperwork is apt to become the superintendent’s responsibility.

James told the story of a worker who injured his elbow on the job and was told by his doctor to take a day off. When he returned to work, he complained his elbow was still sore and sought a second opinion from another physician, who also recommended a day off. As the required paperwork mounted, the employee went to a physiotherapist who recommended he take two weeks off. She said it was later discovered the injured employee moonlighted as a drummer in a band, which brought into question the legitimacy of the injury.

“How much of your time is spent doing paperwork? Factor that into your calculation of how much an injury costs your business.”

Labour board fines assessed to an individual can start at $100,000 if the injured worker wasn’t forewarned about the potential hazards of the job or wasn’t trained accordingly, James said. Fines levelled toward a corporation can be as much as $1.5 million.

She said the labour board could take upward of a year to go over all records before charges are laid. The superintendent or supervisor may lose plenty of sleep during that time and will have to hire a lawyer to fight against the fines, contributing further to the overall cost.

James said when an employee is seriously injured on the job, a number of non-financial costs can be incurred. Employee morale can take a hit, “and your course’s reputation is not so good.” Hopes of hosting a major tournament might be dashed if a critical injury occurs, she added.

“A positive image reflects so much better on your reputation, and can help attract members, customers and workers.”

Safety pays, James said, and is much cheaper in the long run when a golf course invests in safety.

The cost of investing in safety is much cheaper than the costs incurred as a result of a worker being injured on the job.

Every time a “near miss” happens, the better the chances are to prevent the “big one” from happening. When a close call or near miss occurs, the superintendent needs to be notified, she said.

Another benefit to having a solid health and safety record is it helps to attract higher calibre workers, “and they stay.”

Safety training needs to be conducted at the beginning of a golf season, James said. It should include such topics as: 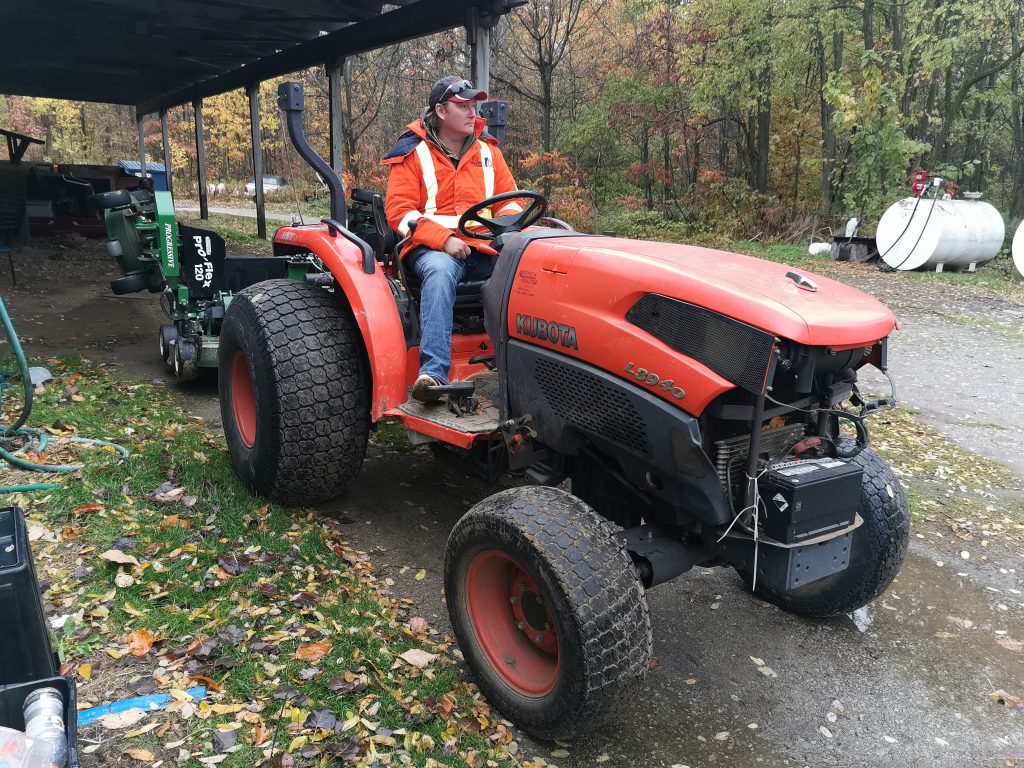 If a golf course’s terrain is relatively flat and the operator is well versed in safety procedures, the chances of a rollover are minimal, but ROPS (rollover protection structure) and seat belts can save an operator’s life when working around slopes and water hazards. (Mike Jiggens/Turf & Rec)

Tractor rollovers may not be the most frequently occurring accidents to take place on golf courses — they happen about once a year on a course somewhere in Canada — but they are at the top of the list of the most costly.

They are also perhaps the most preventable, says James.

Tractors not outfitted with ROPS (roller protection structure) can be an accident waiting to happen.

Because of their high centre of gravity and the fact that two-thirds of their weight is positioned toward the rear, tractors can easily roll over. If the operator is wearing a seat belt and the tractor is equipped with ROPS, a rollover likely won’t result in a fatality. Even if the tractor flips upside down, the operator will remain in place and will be safeguarded by the ROPS frame of protection.

Centrifugal force is another contributor to tractor rollover. If the operator is making a turn while on a slope, his chances of rolling over are increased. James said workers must be trained to know the factors that cause rollovers.

Operators should avoid backing up downhill or driving forward uphill because of the unbalanced weight of a tractor. They should also avoid driving near slopes, bunkers and water hazards because those areas tend to be where most accidents occur.

If a front-end loader on a tractor is positioned high, it changes the machine’s centre of gravity “not in a good way.” If the bucket is filled with material and is positioned high and the operator drives over a bump, “it doesn’t take much for the tractor to roll over.”

James said operators must be reminded to keep the bucket set low so that they can see over the top of it and allow the tractor to adopt a lower centre of gravity.

When operating a tractor around hills, bunkers and slopes, its heavier rear end should go up first. If done the other way, the tractor will want to pop backwards because of its lighter front end.

If the tractor isn’t equipped with ROPS and the operator isn’t wearing a seat belt, he’s liable to be pinned beneath the machine, resulting in serious injury or death.

A golf course mechanic must do a good job at maintaining tractors, she said. If he needs to remove the safety shield from the PTO for whatever reason, the machine should not be used until the shield is properly fit back in place. The PTO spins fast and has immense power, and workers must be trained to be aware of the dangers. The PTO must be turned off when the tractor isn’t in use to lessen the chance of injury.

James shared the story of a worker who stepped over a still spinning PTO shaft in order to obtain a tool. Instead of taking a few more seconds to walk around the tractor to obtain the tool, he tried stepping over the PTO which grabbed his pant leg, pulling him in quickly. It ripped the lower half of his abdomen and severed his penis.

“You can imagine what the rest of his life was like. How much time did he save by taking that short cut?”

Mike Jiggens is the editor of Turf and Rec magazine, a sister publication to OHS Canada.