The pandemic put a lot of focus on workplace heroes — the essential employees who risked their health to keep society humming, including health-care workers, first responders and even grocery store staff.

But that spotlight never really hit the construction industry, which put its collective head down and soldiered on throughout all the lockdowns and uncertainty.

“I don’t want to say our people were forgotten but, I mean, they’re not nurses. They’re not doctors, they’re not the top-of-mind individuals,” said Shannon Truax-Wardell, director, occupational health and safety, construction and materials at CRH Canada Group. “But we were essential.”

High rates of suicide in construction

The struggles her teams faced over the last few years were just as real — with many not knowing where to turn or what to do, she said. From a mental health perspective, the numbers were scary.

“We did some research for North America and found out that construction is actually in the top three for suicide rates among men,” she said.

In the United States, the rate of suicide among construction workers is 53.3 per 100,000, according to 2022 data from the Centres for Disease Control. The only sector with higher rates was mining and oil and gas extraction.

It started the company on a wellness journey, focused on both physical and mental health. Tapping into expertise from its on-staff nurses, it held a mental health awareness week in May 2022. That led to nearly two dozen calls from workers to the nurses about mental health, she said.

“That was kind of the first eye-opening of, ‘OK, we’re on the right path,’” said Truax-Wardell.

‘Suck it up, get the work done’

She noted that the male bravado cliché of “suck it up, get the work done” is real, but evolving — especially with the next generation of employees flooding into organizations.

“They have more education around mental health, and it’s helping to shift the conversation a bit,” said Truax-Wardell.

“As a whole, people are recognizing maybe it’s not OK to just sit there and say suck it up,” she said. “You need some help.”

CRH Canada Group is well positioned for those conversations because of its safety culture, she said.

“We’re very fortunate, because we worked very hard on that,” she said, which means employees often feel more comfortable saying they need help.

The search for ways to spread the word also led to an epiphany: Why not put a message on the side of vehicles — visible to workers and the public alike — to encourage workers to seek help by promoting the Talk Suicide hotline. And that’s exactly what happened.

“It was about what we can do to support our people as well as the greater public,” she said.

The slogan is clever and catchy: “A concrete way to prevent suicide.”

Slapping words on a truck may sound easy but getting buy-in for such a public campaign is often easier said than done. The answer to this pitch from management, though, was an immediate and resounding yes at CRH Canada Group, she said.

In the past, the company has used the space on vehicles to promote causes and raise money for charity. It was often sold as marketing and advertising space, with the cash donated to non-profits.

This time, though, the plan was to put the message out directly.

“I’m not going to lie, I thought I was going to have to fight,” she said. But that fight never materialized as management bought into the concept 100 per cent from the start — and the plan is to expand the messaging to other vehicles.

Right now, the company has five ready-mix drums bearing the information. Soon it will launch on aggregate haulers and potentially even on pickup trucks.

“We actually have on our tailgates that Talk Suicide number as well for our light-fleet pick up trucks,” said Truax-Wardell. 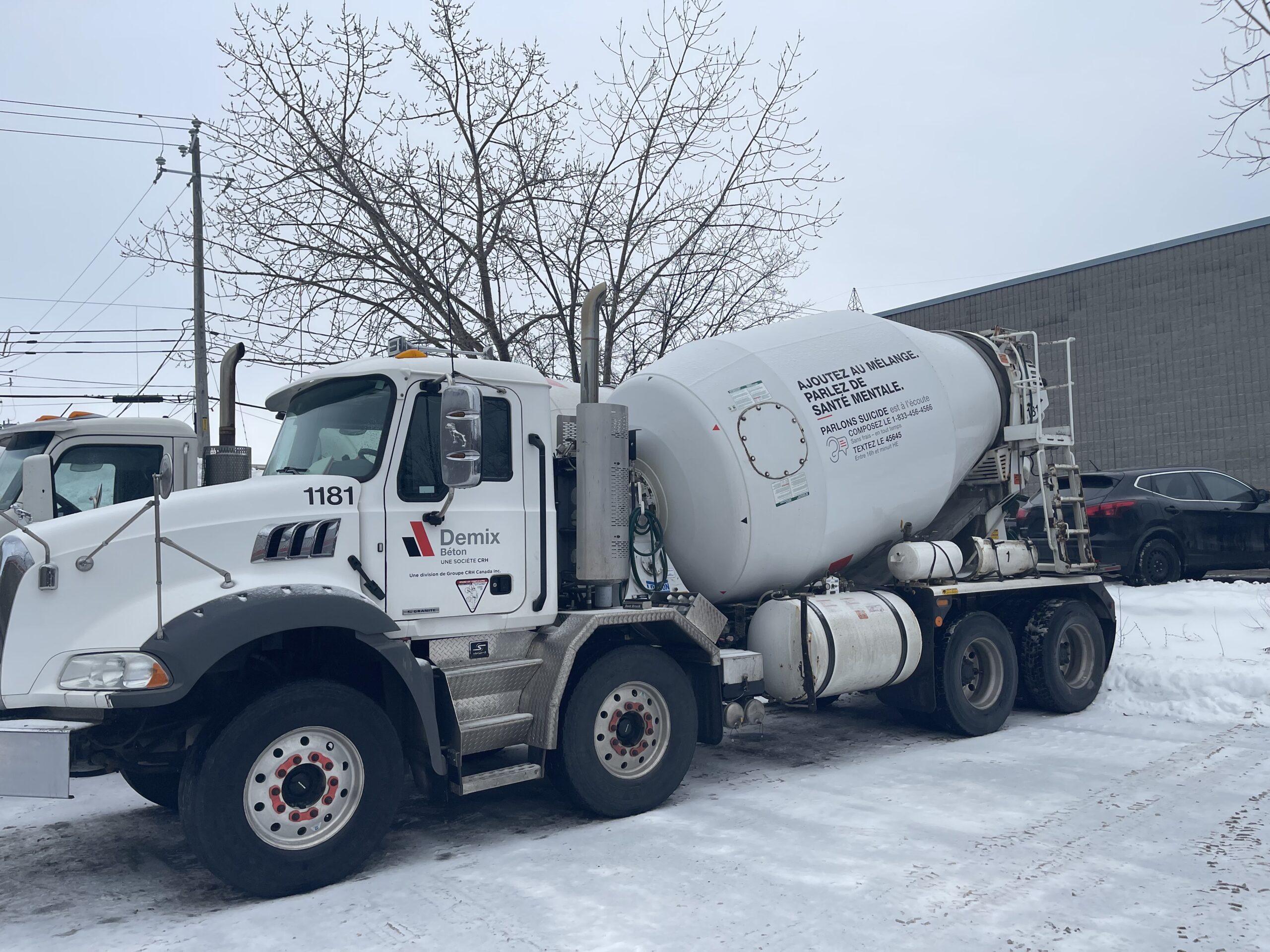 The reaction from employees has been phenomenal, she said.

“We had one employee, in a testimonial he sent in, say he was proud to work for a company that actually takes mental health seriously,” said Truax-Wardell.

Any concerns the company had about the messaging — for example, not making it look like they were promoting the negative side of things — were quickly put to rest, she said.

“They’ve been asking for more trucks, which I did not anticipate right away,” she said. “That’s pretty cool to see.”

The first truck hit the road in mid-November, and will be on the roads regularly across southern Ontario and in Quebec, including the Greater Toronto Area, Kitchener, Ont., and Montreal. The CRH Canada Group brands with the Talk Suicide information include Dufferin Concrete, Ontario Redimix and soon to be Demix Beton, she said.

CRH Canada Group settled on Talk Suicide as the helpline to promote for a variety of reasons, she said.

They wanted a number available 24/7, seven days a week. They also wanted it to have a text option to seek assistance.

“We know many people are more willing to text than pick up the phone,” she said.

“We have been exposed to situations where our employees have either been touched by suicide or have been affected by suicide,” she said. “And we want to be there to support our people as well as the public.”