The construction disaster that change B.C.: Remembering the Bentall tragedy 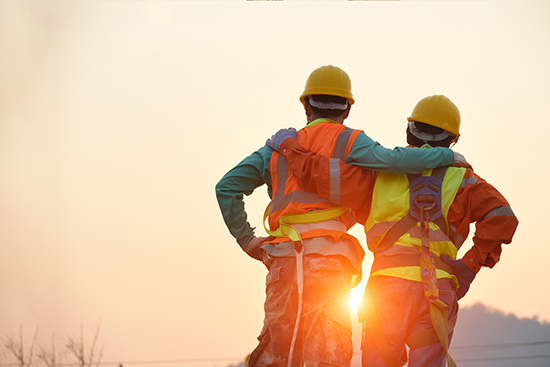 By Zak Vescera, The Tyee

Mike Davis’s last outing with his dad was a bike ride to the worksite where his father was helping to build a massive office building.

They had bought the bikes at an RCMP auction and fixed them up like new. They rode the 10-speeds from Burnaby down Kingsway, zipped through back streets and found themselves at the shell of the Bentall IV, a 35-storey building that Donald Davis was helping build as a carpenter.

To Donald’s chagrin, the site was locked up for the weekend. He’d wanted his son to see it. They headed home, stopping briefly to buy a snack at a convenience store with the spare change they had in their pockets.

Soon after, Donald Davis went to Bentall IV and never came back.

He and three other carpenters — Brian Stevenson, Gunther Couvreux and Yrjo Mitrunen — fell to their deaths from 100 metres when the platform that held them collapsed on Jan. 7, 1981. Donald was 34. Mike was only 13.

“My dad would come home from work, put down his lunchbox and play basketball with me in the driveway. It seemed he was the loudest one on the sides at my soccer games,” Mike Davis said at a memorial this month.

“And one day, he just didn’t come home.”

The Bentall tragedy inspired a slew of changes, revolutionizing occupational health and safety in construction. Government officials and families gather every year at a small nearby plaque to commemorate the lives lost and reaffirm their commitment to health and safety regulations.

Much work still to be done: Labour advocates

But many labour advocates say there is still much work to be done. About 30 British Columbians who work in construction die every year, a figure that union leaders say is unacceptably high.

“I think the lessons that we learned have been forgotten,” said Lee Loftus, an insulator and former president of the BC Building Trades. “These are lessons that will be learned again tomorrow, and that’s a shame.”

The day of the fall

Loftus remembers when the platform collapsed. In 1981, he was a young journeyperson working as an insulator in downtown Vancouver. He had worked on Bentall IV just weeks earlier.

Within 30 minutes of the accident, Loftus had gotten word; within 45 minutes, workers from across construction sites downtown had rushed to the scene.

“That’s just what you do. We were all at a loss,” Loftus said. He remembers chaos: ambulances and firetrucks everywhere. “We just stood there dumbfounded, trying to figure out what the hell? What happened?”

That was the question families had, too. They lobbied aggressively for a coroner’s inquest into the death. Over an eight-day hearing the next month, that inquest found a series of problems plaguing the site: designs were approved without minimum testing, adjustments were made to equipment without the green light from engineers and there were effectively no written safety policies.

And then there was the platform — a “flying” or “slip” form meant to allow workers to pour concrete on each floor as the building rose. “Panel E,” as it was called, had modifications that made it atypical.

The result of the coroner’s inquest was a joint union/employer inquiry into the state of B.C.’s construction industry and a blitz of activity from what was then called the Workers Compensation Branch to get construction companies to comply with existing rules.

“Employers were not talking about occupational health and safety. They weren’t doing safety education. There were some issues with compliance and safety structures,” Loftus said.

Overnight, he said, things changed. Suddenly safety committees were a regular feature at worksites. There were new rules around scaffolding and meetings about known hazards.

Leading that charge were members of the families, who testified at the coroner’s inquest and led a push to commemorate the tragedy at a plaque that now sites near the Burrard SkyTrain station _ a request Vancouver’s Park Board had originally rejected.

Every year, government officials and union leaders gather on the anniversary of the Bentall tragedy to remember the lives lost. The families, though, do this every day.

“I’ve always believed that my grief was like the ocean,” Davis said. “There’s a lot of it, and sometimes the tide is out and it’s not close enough to touch me. Then there’s other times the waves will get you, and you don’t know when they’re going to come. It’s random as you walk along the beach. And there’s days you’re hit with huge waves.”

In the immediate aftermath of his father’s death, Davis was in shock. Then the grief set in. It comes and goes, he says. When his oldest son turned 13, it hit him hard.

He found ways to use his grief. At one point, he worked as a chef, and parlayed that into a job with BC Ferries. He joined the union there and became a member of the local safety committee.

“It struck a nerve. It struck a chord. Later I realized I was putting some of my pain I had been carrying for years and putting it to some positive purpose,” Davis said.

The legacy of Bentall IV is one of hard lessons and policy change.

But few in the labour movement believe worker protections in construction are strong enough today, and many feel they’ve been slipping back.

“We have big changes, and some of those changes have been enduring. But we have also drifted back into complacency,” BC Building Trades executive director Brynn Bourke said.

Bourke says many of the recommendations made by the inquiry — like monthly construction site inspections and automatic penalties when orders are disregarded — are still things unions are calling for today.

Loftus attended this year’s memorial at Discovery Park, near where Bentall IV still stands. Wearing a hardhat and safety vest, he laid a white rose atop the plaque. Like many, he comes here every year, not because the work is done but because he knows it isn’t.

“It reminds me of something we need to try to get back to. It reminds me there is more loss of life in front of us if we don’t,” Loftus said.