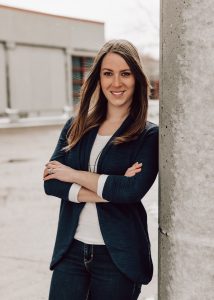 Alyssa Hartfelder, 29, is a health, safety and environment manager at Liquids in Motion in Millet, Alta.

Alyssa Hartfelder took the challenge of COVID-19 head on, making sure her colleagues at Liquids in Motion were able to perform their work safely, while abiding by new regulations.

“COVID-19 certainly changed my day-to-day workload, as well as the day-to-day hazards associated in the workplace,” she said. “Not knowing or physically being able to see if someone was in danger was, and still is, something that will haunt me.”

In her role, Hartfelder oversees safety operations for the company that transports bulk liquid across Canada and the United States.

She transitioned into her safety role with the support of Liquids in Motion and played an instrumental role in implementing an electronic logging device program that has been pivotal in the company’s daily operations.

Hartfelder is also moving the company to a new learning management platform, setting internal safety standards higher than ever before.

“The most gratifying part of my job is being able to mitigate employees’ concerns,” she said. “There is no better feeling than seeing relief on someone’s face when you let them know that there are options, and the company is there to work with them in finding resolutions.”

Hartfelder holds an OH&S certificate from the University of Alberta.