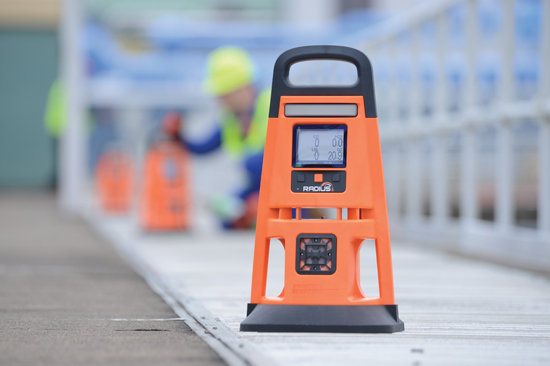 “The more data the employer has about what’s going on in their workplace, the better able they are to protect the worker and mitigate the risks, and defend themselves if something goes wrong.”

“It really is the difference between an old-school phone wired into your house, and a cellphone,” he said from company headquarters in Calgary. “There’s just so many more things you can do with it.”

Blackline’s G7 personal detectors are designed to test for no-movement. The devices are connected to live operators. If a detector senses that a worker has not moved, Blackline’s safety centre will call the worker to make sure he or she is OK.

This can allow for faster response time and save lives, said Stinson.

“You can respond to somebody who may be knocked down in seconds, as opposed to finding them unconscious, or finding their body,” he said.

Blackline works with customers to develop a robust safety plan, and the company is able to call emergency services directly.

First responders “have a lot to do, and they don’t want to deal with false alarms. That is a key thing: we can determine whether it’s a real alert or not a real alert. When we call 911, they know. They listen.” 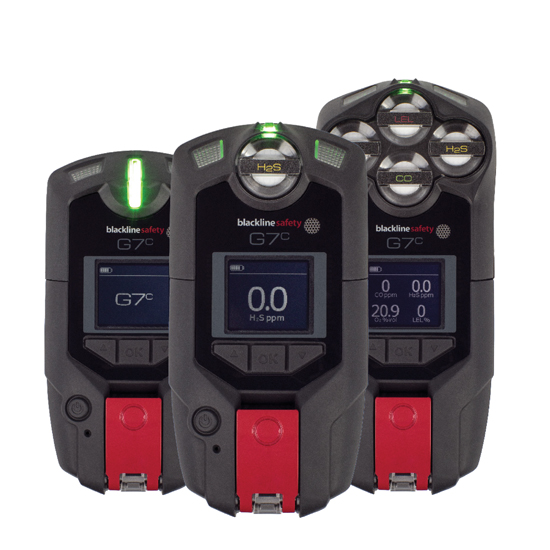 Blackline’s G7 personal detectors are designed to test for no-movement.

Blackline has built the entire infrastructure for its products, including the cloud where data is stored and the SIM cards in the detectors, said Stinson. The G7c connects to cellular networks, and the G7x uses satellite.

In Canada, Blackline’s G7 products roam on Bell, Rogers and Telus networks. If the network the device is connected to has a shortage, it will switch over to another network that is operating. This gives “very robust and very wide coverage that’s not possible for the average consumer,” said Stinson.

Connected devices also help workers communicate with each other.

The Ventis Pro5 monitors from Industrial Scientific Corporation can also be connected to each other. This allows workers to know when a colleague is in trouble, said Cynthia Horn, an applications specialist for the Pittsburgh, PA-based company, who works from Montreal.

“If one of the devices goes into an alarm, everyone who is linked together in that team will be detected via their detector,” she said.

The Ventis Pro5’s have man-down and panic alarms.

Devices that can detect multiple hazardous gases are increasingly popular. The Ventis Pro5, for example, can detect for up to five gases while using the same docking station and has similar buttons as Industrial Scientific Corporation’s Ventis MX4.

The Ventis Pro5 monitors for standard hazardous gases: methane, carbon monoxide, hydrogen sulfide, nitrogen dioxide and sulphur dioxide. It can be configured to test for a fifth gas as well, including carbon dioxide, ammonia, hydrogen cyanide, chlorine and phosphine.

The company’s Tango TX2 detector monitors for two gases. It uses individual sensors to increase accuracy by decreasing the chances of a detector sounding an alarm for a cross-interference gas. 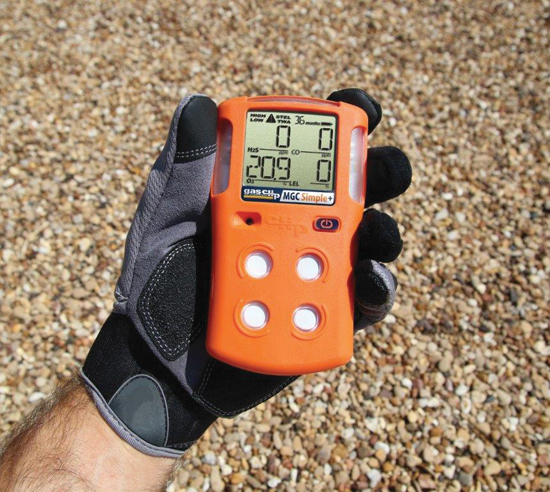 Gas Clip’s most popular products are the Multi Gas Clip (MGC) line, including the MGC Simple Plus.

“These are gases that, if they’re present, they could trigger a reading on your detector on a different sensor,” explained Horn, noting the second sensor is often for a common gas, which helps reduce the chances of cross-interference.

“The more data the employer has about what’s going on in their workplace, the better able they are to protect the worker and mitigate the risks and defend themselves if something goes wrong,” he said. “Multiple gas monitors just help the employer give the worker the best option, or the best protection.”

The company is known for long-lasting batteries, said Goebel. The batteries can last for two months without a charge. It takes approximately six hours to recharge.

The MGC Simple Plus can run continually for three years without charging. It can’t be recharged, and after three years, it needs to be replaced. This makes it a good choice for work on pipelines.

“It’s hands-free,” Goebel explained. “You don’t have to do anything with it. There’s no downtime. The employees can keep on working without having to worry about calibrating or charging.”

Gas Clip’s MGC IR pump takes samples from 75 feet. The company also has a new external pump that can be attached to any of its products to give them the same capability.

They’re especially useful in “dynamic” work environments where there’s constant change or movement, like moving down a pipeline, through a field or at a construction site.

“It’s kind of a new concept of having a portable area monitor,” said Horn. “It doesn’t take any installation; you don’t have to bring in a team of technicians to mount it to a wall like for a true fixed monitor.”

This design increases visibility and is especially helpful when workers can’t see each other on a worksite, she said. These detectors can also be equipped with live monitoring.

Data scientists at Blackline have been able to determine how the risk of an accident increases after not being supervised for a certain amount of time. With this information, the company can send reminders to safety managers that they need to return to a specific site and make sure everyone’s working properly.

During the COVID-19 pandemic, Blackline has also used its products for companies’ product tracing, a service it offered to customers for free in 2020.

But the pandemic could cause more companies to see how connected technologies can improve employee safety, he said.

“Coming out of this, people are going to realize that they have to take care of their employees,” said Stinson.

“The takeaway from COVID is you’ve got to take care of your employees; their families matter, they matter as people, their emotional state matters.”

This Safety Gear feature appears in the May/June 2021 issue of OHS Canada.