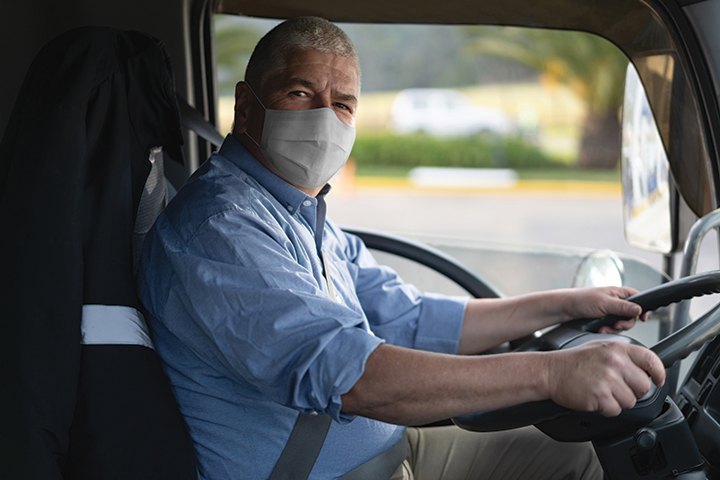 In the early days of the COVID-19 pandemic, while many businesses shuttered, truckers risked jeopardizing their own health. (Andresr/Getty Images)

Canada’s truck drivers always answer the call and they proved it once again during the COVID-19 crisis. While many businesses shut down, truckers continued to roll.

Deemed an essential service, they remained on the job, bringing food to grocery stores and moving medical supplies and products to market.

However, life behind the wheel came with a significant set of health and safety challenges, especially in the early days of the crisis.

Many gas stations, highway rest areas and restaurants limited access to facilities or closed altogether, making it difficult for truckers to find a bathroom, hot shower or warm meal.

“It’s been tough,” said Jean-Marc Picard, executive director of the Atlantic Provinces Trucking Association, which represents more than 320 companies. “However, I can say that there’s been some good initiatives across the country now for food and rest areas and we’ve had some local hotels offer free showers.”

“Some places are now offering their washrooms to truckers and are cleaning them every time somebody uses them,” he said. “Everybody is just taking double the precautions these days, which is nice.”

In the early days of the pandemic, while many businesses shuttered, truckers risked jeopardizing their own health. To their credit, they kept the big rigs rolling.

Some restaurants eventually rose to the challenge and opened their doors to truckers.

McDonald’s was first out of the gate, offering a curbside service to help feed truckers. Companies like Tim Hortons, Swiss Chalet and Harvey’s soon followed suit.

Ontario’s provincial government also stepped up by providing a 511 app, which gave information from cameras on highway conditions and identifying rest areas that offer food and fuel.

While the crisis over food and washrooms has apparently been settled, the situation has prompted carriers in the trucking industry and the associations which represent them to take a closer look at their health and safety
guidelines.

To stay safe, drivers, carriers, shipping companies and border officials are finding new ways to limit contact with one another. More companies are also making use of virtual documentation and cargo tracking.

Carriers are ensuring that drivers have access to credit cards for food, fuel, tolls and any potential emergencies, and are providing hand sanitizer and disinfectant in trucks to clean high-touch surfaces. Vendors are making use of tap-payment options.

Many in the supply chain now wear medical gloves as a precaution.

Dave Earl, president and CEO of the BC Trucking Association, said the organization sourced 60,000 bottles of hand sanitizer and developed new best-practice guidelines for drivers to follow when on the job.

The association has also been trying to source masks, as Health Canada and the Centers for Disease Control and Prevention have come out and supported the practice of wearing them, he said.

“Drivers have used them but we’re starting to see a proliferation of different agencies saying, ‘Hey you might want to think about it.’”

Shippers and receivers are also now taking a closer look at their procedures to explore whether they can provide virtual documentation so drivers will not be required to leave their cabs to do paperwork, he said.

An issue of concern for drivers is what to do if they’re asked to pick up a load in a highly contagious area, said Earl.

Of equal concern is what a driver should do upon returning from a trip outside the country, he said.

Although the federal government has declared that commercial truck drivers are exempt from the requirement to self-isolate for 14 days upon entering Canada from abroad, many are still isolating themselves for the safety of their families. Others just stay on the road or refuse to go back out, according to Earl.

Jonathan Blackham, director of policy and public affairs for the Canadian Trucking Alliance (CTA) which represents more than 5,000 companies, said the group has been working with the federal and provincial governments to keep as many facilities as possible open and clean, with accessible washrooms and food.

The CTA launched a successful #ThankATrucker campaign that has drawn attention to the cause and resulted in governments at all levels recognizing that truck drivers are indispensable, frontline workers who are critical in the fight against the spread of COVID-19, and to keeping the wheels of commerce moving.

While individual companies may have policies tailored to their own specific workplace needs, the CTA has produced a tip sheet for carriers which includes guidance on best practices when they are reviewing and updating their policies. Transport Canada has also recommended practices for road carriers along with resources available through other departments and provincial trucking associations.

“These are trying times for companies, and we know it can often be difficult to find the information you’re looking for,” said Blackham. “We’ve tried to consolidate much of the information carriers are asking for into an updated, single document to make it easier on our members to get the information they need.”

The CTA recommends that truckers adhere to social-distancing rules and that carriers try to limit contact with drivers by reducing paperwork that’s exchanged, or simple things like ensuring they don’t use the same pen when signing paperwork.

According to Christopher Monette, director of public affairs at Teamsters Canada, cleanliness of trucks is a big issue that employers must address, as they may be used by many different drivers over a period of time.

“You have several people using the truck and you’re getting into a truck and you don’t know how many people have touched the high-touch surfaces. There are some employers who have stepped up to make sure these trucks are clean but it’s still an ongoing issue whether it’s local delivery or long haul,” he said.

“Having access to hand sanitizer, for example, in their truck and cleaning material like disinfectant to really clean those high-touch surfaces is important and we feel is a responsibility that falls upon the employer.”

The union flagged the issue to Transport Canada and the government put out the recent guidelines for truck drivers which recommend everything from using hand sanitizer to wearing gloves at pumping stations.

Monette said governments, industry and society are all in battle together, so everybody must do everything possible to keep truck drivers safe, as Western civilization and the supply chain depends on them.

“Everything we buy from store shelves, everything we order online, everything that factories need to produce the goods that society needs — all that has been transported at one point or another on a truck,” he said.

“If truck drivers get sick, our supply chain collapses and everyone suffers. And that’s something we all have a vested interest in avoiding.”

Grant Cameron is a freelance writer in Burlington, Ont.

This case study was published in the May/June 2020 issue of OHS Canada.