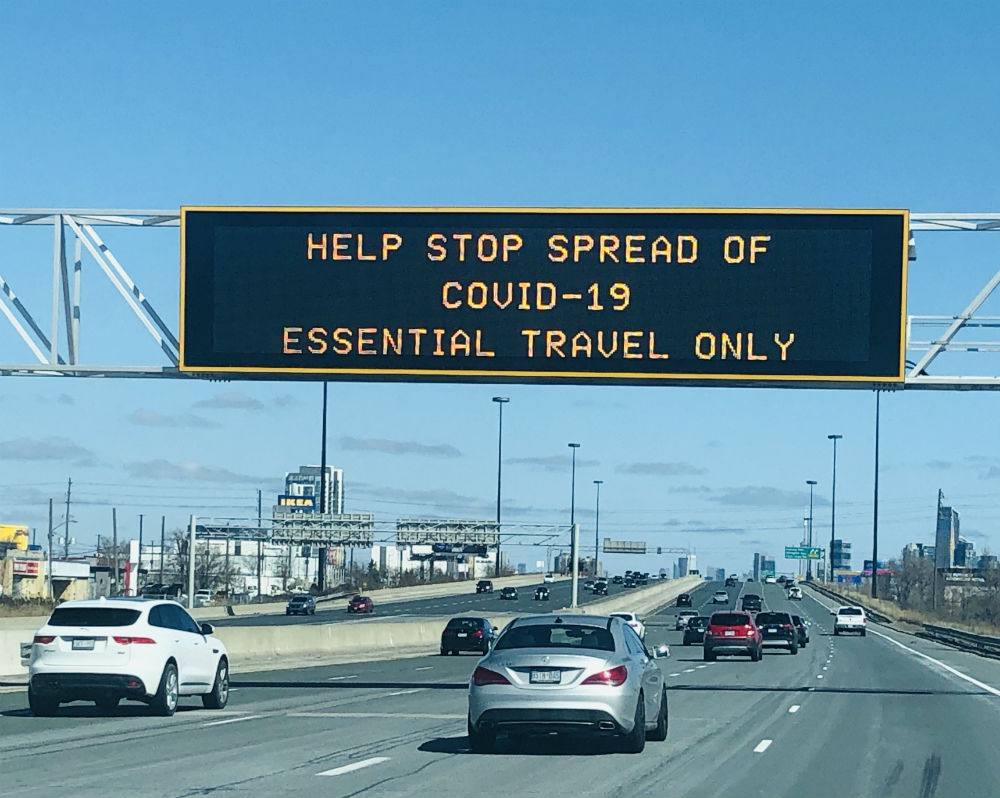 A sign above the Gardiner Expressway in Toronto warns against non-essential travel on March 22. (OHS Canada)

“I understand how difficult this is and how frustrating this is for some people, but we know that reopening too quickly or carelessly would lead to a resurgence that might well force us to go back into lockdown, to shut down the economy once again, and nobody wants that,” Trudeau told reporters Monday.

“We need to make sure we are keeping Canadians safe first and foremost.”

The prime minister also cited financial support available across industries, including the federal wage subsidy as well as loans starting at $60 million for large companies.

Last week, Trudeau extended a ban on non-essential travel between Canada and the U.S. until at least July 21.

Days later, chief executives from 27 companies in sectors ranging from aviation to banking and telecommunications called for a “measured” reopening of the skies that would see travel resume across all provinces and between select countries.

Manitoba and the Maritime provinces continue to restrict interprovincial travel, while travellers arriving in Canada from abroad must self-isolate for two weeks.

Many European Union countries have begun to reopen their borders to EU and some non-EU members.

“Why was Transport Canada allowing air carriers to fill airplanes to capacity when all of our public health guidance tells us that we should not be doing that?” New Democrat Don Davies asked.

Kevin Brosseau, assistant deputy minister for safety and security, pointed to mandatory measures that include face masks on board aircraft and, starting next month, temperature checks at the point of departure.

Transport Canada encourages airlines to maintain empty middle seats, but does not require the precaution.

For now, Air Canada and WestJet block the sale of middle or adjacent seats in economy class and throughout the entire plane, respectively. Ultra-low-cost carrier Flair Airlines charges $49 to guarantee an empty adjacent seat.