Threads of Life speaker recalls tragic 2017 death of her brother 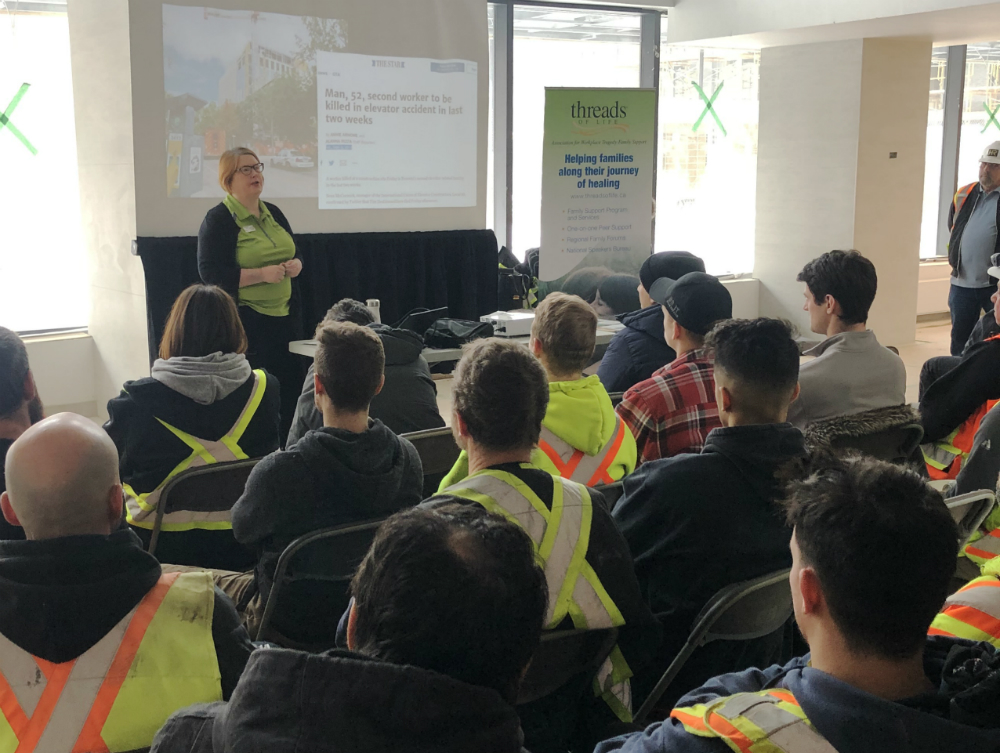 C.K. DesGrosseilliers speaks to Toronto workers on behalf of Threads of Life on Jan. 23. (Photo courtesy of D. Morris)

No job is worth dying for.

That’s the message C.K. DesGrosseilliers wanted workers to take back to the job with them following a recent injury prevention presentation at the nearly completed twin high-rise project at Eglinton Avenue and Don Mills Road in Toronto.

DesGrosseilliers, a volunteer speaker with the Threads of Life charity was invited to speak to workers on behalf of Lindvest.

The Sonic Condos construction project was unnervingly quiet for 45 minutes when DesGrosseilliers recalled how her brother Tim was killed after being crushed by a piece of falling equipment while working in a downtown Toronto elevator shaft on Sept. 8, 2017.

That year, her brother became one of the approximately 1,000 Canadians who die each year as a result of work-related injuries and illness. Thousands more experience life-altering workplace injuries.

That fateful day, DesGrosseilliers said her brother wasn’t even supposed to work — a planned day off was cancelled so he decided to go into work.

Her voice breaking at times, DesGrosseilliers said her brother was a stickler for safety but when the correct strapping for the elevator motor was not sent, “he tried to get the job done” even though the crane operator walked off the job due to safety concerns.

‘He should have stopped’

She said her brother had raised safety concerns about the site in the past.

“Tim hated the jobsite… He probably wanted to get the job done and over with — so he tried to do the job with other strapping,” she said.  “He should have stopped. He should have done what the crane operator did and walked off.”

“These buildings will stand for decades — if not centuries,” DesGrosseilliers told dozens of trade workers gathered in the lobby of the project. “The job can wait an afternoon. You have a right to go home safe.”

Lindvest was proud to support Threads of Life, said company vice-president Michoel Klugmann, who handed over a cheque for $2,500 to the Canadian charity.

“I believe the message got through that life is fragile and the decisions we make — or fail to make — can be the difference between life and death,” he said. “In the construction industry, you can’t take nothing, not even the most menial tasks, for granted.”

George Christopoulos is director of communications for Tickner and Associates in Richmond Hill, Ont.