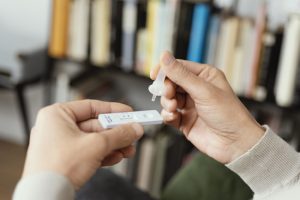 Ontarians who suspect they caught COVID-19 at work can make claims with the Workplace Safety and Insurance Board even without a positive result from a PCR test now that the gold-standard assessment tool is no longer available to most residents.

A top executive with the board says, however, that individuals should still try to get a medical opinion or rapid test to confirm their infection.

“Our approach hasn’t changed too dramatically,” said Scott Bujeya, chief operations officer with the board, which supports those injured at work. “The information gathering that we’re doing is very similar to what we would have been doing pre-Omicron.”

The province announced late last year that it was limiting access to PCR tests to certain high-risk groups in light of a massive surge in cases of the Omicron variant.

Bujeya said in an interview that those trying to file WSIB claims related to COVID-19 wouldn’t be out of luck without a rapid test or doctor’s note, but the board “would certainly encourage” them to speak with a medical professional through a virtual walk-in or telephone appointment.

If that’s not possible, other factors are considered when probing a claim, Bujeya said. For example, investigators will look at whether the workplace is considered high-risk, if other workers have become sick with COVID-19 or if the individual’s household members have also come down with the illness. The process also involves getting statements from the worker and employer.

“We encourage anybody who believes they might have contracted COVID at work to file a claim with us and then allow us to make the appropriate inquiries to establish whether that’s in fact the case,” he said.

The board has allowed 31,363 claims related to COVID-19 since the pandemic began and denied 2,257 claims. Almost a third of allowed claims have come from nursing homes and other residential care settings. Hospitals, agriculture and manufacturing workplaces also represent large portions of the total.

Bujeya said the board compensates individuals for lost wages and helps them access treatment. Typically, people infected with COVID-19 on the job have returned to work within 30 days, he said, though some have required support for longer.

There have been new concerns about how the claims process will work, however, now that many people aren’t able to confirm that they had the virus at all, let alone where they caught it.

Top public health officials have said people with common symptoms should assume they have the virus and isolate rather than seek testing as capacity has been strained due to Omicron’s rapid spread.

Bujeya said the board is still receiving claims from people who confirmed their infections earlier or who work in jobs like long-term care where PCR tests are still available.

There haven’t yet been many claims from people who haven’t been able to access tests, but Bujeya said that may have to do with a time lag since the province only shifted its testing strategy late last month.

The phenomenon known as long COVID, where people experience post-COVID-19 symptoms for weeks or months after an infection, has not yet shown up widely in the WSIB’s system either, Bujeya said. But he said people who have lengthy complications can come back for assistance at a future date once their claim is in the system.

“If somebody didn’t file a claim, it clearly would be more challenging down the road,” he said.

Michael Hurley, president of the Ontario Council of Hospital Unions branch of the public sector employees union, said workers have already had claims contested because their employers denied that they caught COVID-19 at work.

He said the union has been advocating for an automatic presumption that health workers with COVID-19 caught the virus on the job.

He said the same presumption should apply to anyone who works directly with the public, like in schools, grocery stores or pharmacies, especially now that the virus is more widespread than ever and the province has shorted the recommended post-infection isolation period.

“I do think that would be reasonable,” he said, noting that front-line workers do not all have access to the highest-quality protective equipment or other safety measures during their shifts.