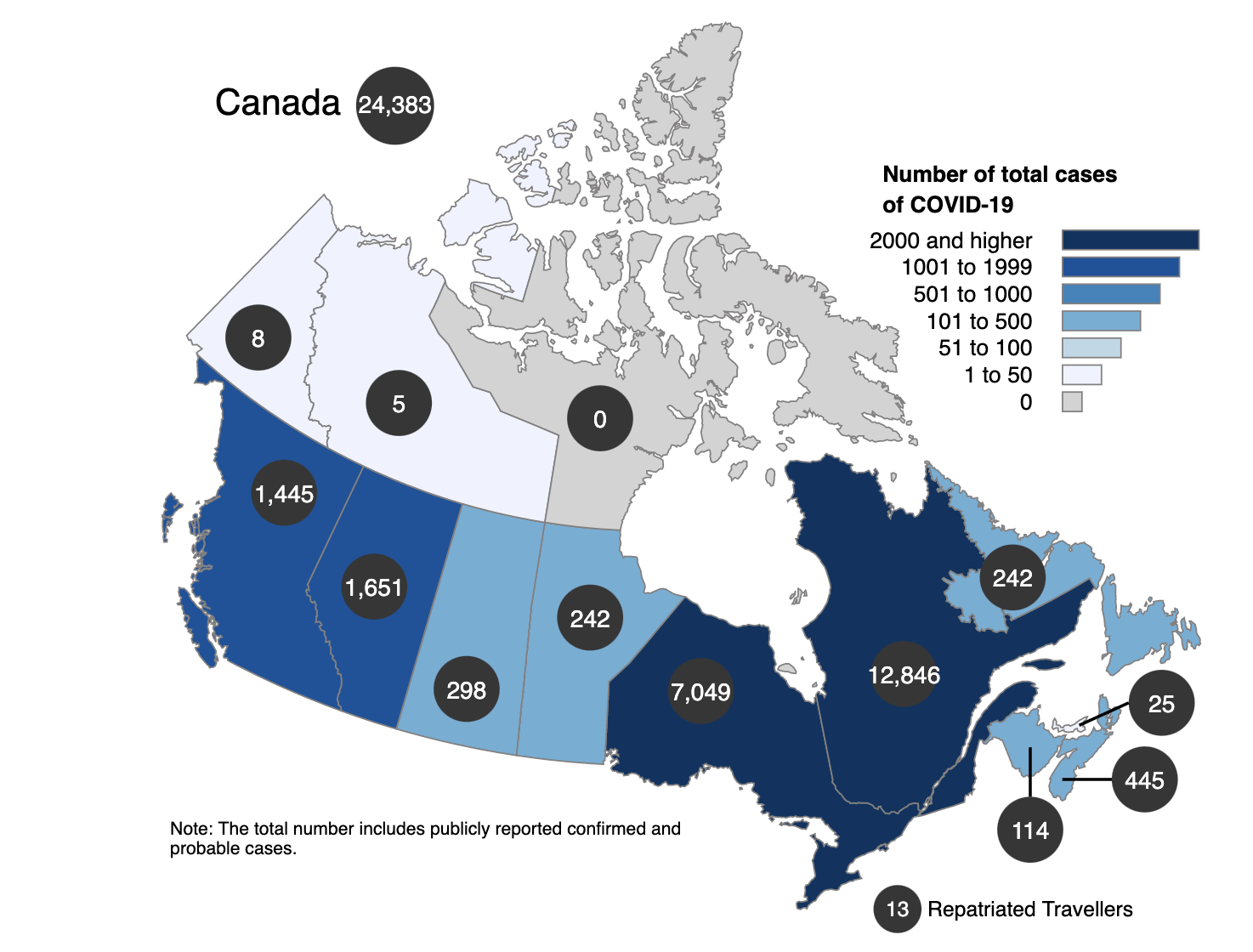 The COVID-19 pandemic has affected every province and territory. Canada’s chief public health officer and her provincial counterparts are encouraging people to wash their hands, give each other space and wear a mask if they are sick or a homemade one if they believe they could have been exposed to the virus and are not showing any symptoms.

Ottawa has put money into health-care research and the economy. It has also put restrictions on international travel and is mandating 14-day quarantines for travellers returning to Canada to try to limit spread of the novel coronavirus.

Classes are suspended or cancelled at schools throughout the country.

Each province and territory also has its own emergency measures to detect cases and prevent spread of the virus.

Here’s a look at some of the ways different jurisdictions are responding:

B.C. declared a provincial state of emergency on March 18, a day after announcing a public health emergency.

The measure gives the province authority to take any action necessary to protect people and communities, including charging people who ignore public health orders.

The province has also prohibited reselling essential supplies such as food and cleaning material.

All parking fees at B.C. hospitals have been cancelled during the pandemic to ensure safer access for patients and staff.

Officials have prohibited gatherings of more than 50 people in one place, including restaurants, schools, places of worship, theatres, casinos, sports arenas and outdoor venues.

That has forced the cancellation of the annual TD Vancouver International Jazz Festival in June.

All provincial parks are now closed.

The Vancouver park board says cars are being banned from most roads in Stanley Park to give cyclists, walkers and joggers more room.

Premier John Horgan says he is extending the state of emergency through the end of April 14.

The province has given law enforcement agencies full authority to enforce orders and issue fines for violations.

There are restrictions on mass gatherings of more than 15 people, both indoors and outdoors at places of worship, weddings or funerals. Any gathering must allow people to keep the two-metre distance from others.

All non-essential businesses have been ordered closed, including personal service providers, clothing stores and furniture stores.

Albertans are prohibited from attending public or private recreational and entertainment facilities. Restaurants have been ordered closed, except for takeout or delivery. Casinos are closed.

Vehicle access to provincial parks and public lands is prohibited to visitors.

Albertans who have been ordered to quarantine cannot leave their property for 14 days. That also bars people who live in apartments to use the elevators.

There’s also a new restriction on visitors at nursing homes, long-term care facilities and hospitals — although exceptions could be made if a child is in hospital or a woman is about to give birth.

It directs all orders from the chief medical health officer be followed and gives police the authority to enforce them.

Public gatherings are limited to no more than 10 people.

Nightclubs, bars and lounges are closed, but they are allowed to provide takeout food or alcohol.

Dental, optometrist, chiropractic and podiatry clinics are closed — except for emergencies.

All employees at long-term care facilities are having their temperatures checked and are being monitored for COVID-19.

Health officials say there’s no evidence that domestic livestock or pets can be infected with or transmit COVID-19, but it has not been ruled out. They suggest anyone with the virus avoid contact with animals, as well as people, until more information is available.

The Saskatchewan government is promising one-time emergency bursaries to post-secondary students whose studies and jobs have been affected the pandemic.

The Manitoba government declared a provincewide state of emergency on March 20.

The province has limited public gatherings to no more than 10 people, down from an earlier limit of 50.

It includes any indoor or outdoor spot, places of worship or family events such as weddings and funerals.

The province is instituting fines for people who don’t follow public safety orders during the COVID-19 pandemic.

Dauphin’s Countryfest, which has been running for more than 30 years, is cancelled this year.

Non-essential businesses have been ordered to close. Salons, spas, bars and other establishments were closed as of April 1. Restaurants can remain open for takeout or delivery only.

The closures do not affect health-care facilities, government services and other institutions.

Bingo and gaming venues as well as wellness centres and gyms are closed.

The province is also letting people hurt by the COVID-19 economic fallout avoid penalties and interest on some utility payments and property taxes. There’s also a freeze on all rent increases until at least May 31.

No visitors are allowed in long-term care facilities and hospitals. There could be exceptions in hospitals for compassionate reasons.

Ontario declared a state of emergency on March 24.

All business except those deemed essential have been shut down.

The province will allow curbside pick up and delivery of cannabis.

All industrial construction except for essential projects, such as hospitals, has been halted.

All bars and restaurants, except for takeout and delivery, have been closed.

Any public events of more than five people, including parades, events and services at places of worship, are prohibited.

Ontario has extended its declaration of a provincial emergency until at least April 23.

The province says it will also quadruple COVID-19 testing capacity to 16,000 by May 6.

Quebec declared a public health emergency on March 13 and renewed it a week later.

The government has reduced non-priority services and prohibited indoor and outdoor gatherings.

The Quebec government asks for all festivals, sporting and cultural events scheduled for this summer to be cancelled or postponed.

That includes the Rogers Cup women’s tennis tournament scheduled for Aug. 7 to 16 in Montreal.

Tennis Canada says the women’s event will return to Montreal in August 2021.

Officials have ordered police to set up checkpoints, severely curtailing access to eight remote regions. The restrictions have since been extended to ban all non-essential travel to much of cottage country north of Montreal, and to Charlevoix, northeast of Quebec City.

Quebec has also prohibited non-essential visits to hospitals, residential and long-term care centres or between children in foster families and their biological families.

Designated clinics have been opened for anyone displaying symptoms.

To give retail employees a break, stores are closed on Sundays in April, with only pharmacies, gas stations, convenience stores and takeout restaurants remaining open on those days.

Montreal’s mayor has also declared a state of emergency to help authorities better manage the spread of COVID-19 among the city’s homeless.

A state of emergency was declared in New Brunswick on March 19.

Businesses serving food and beverages have been restricted to takeout and delivery. Lounges and clubs are forbidden from allowing customers to enter.

Customers are not allowed to enter retail businesses, unless they serve food, medication, fuel or other essential supplies.

Many health services — such as chiropractors, dentists and optometrists — are prohibited from seeing patients in person unless absolutely necessary.

No gatherings larger than 10 people are allowed and residents are urged to stay home as much as possible. They are also asked to delay non-essential errands.

Any unnecessary travel into New Brunswick is prohibited.

All playgrounds in the province are closed, but some public parks and walking trails remain open as long as physical distancing measures are followed.

The province of Nova Scotia declared a state of emergency on March 22 and it has been extended to April 19.

It set out a 14-day rule for self-isolation and self-quarantine for people returning from outside Canada.

All schools and daycares are closed. Long-term care facilities and care homes are closed to visitors.

Casinos have closed and no business is allowed to operate a video lottery terminal.

Restaurants are restricted to takeout and delivery service only. Drinking establishments are closed.

There are also restrictions on health professionals such as chiropractors and dentists.

Two mobile assessment centres have been established to do community-based testing.

It included an order to Islanders to refrain from attending any public gatherings and a closure of libraries, child-care facilities, gyms and schools.

Hospitals have restricted visitors — although one visitor is allowed at a time to see patients in palliative care, intensive care, neonatal intensive care, obstetric and pediatric units.

Measures also include fines for anyone who doesn’t comply with a direction to self-isolate.

The public health officer recommends people who are self-isolating stay on their own property when outside.

The government is working to open an out-patient clinic to allow for increased testing and to ease the load on hospitals.

Officials have also deferred provincial property tax and fee payments until the end of the year.

The province declared a public health emergency on March 18.

It includes the closure of most businesses — with the exception of grocery stores, pharmacies, gas stations and other stores considered essential.

Gatherings of more than 10 people are not allowed. That includes funerals and weddings.

Grocery stores and big box stores will be allowed to open this year on Good Friday, which is normally closed as a public holiday, to prevent them from becoming too busy as people shop for Easter weekend.

Anyone arriving from outside the province is required to self-isolate for 14 days.

Health officials have the authority to restrict the rights and freedoms of people in a time of crisis. People who violate orders face fines.

Yukon declared a state of emergency on March 27.

The government has placed enforcement officers at the Whitehorse airport and at its boundaries to get details of travellers’ self-isolation plans, their contact information and to look for any symptoms of COVID-19.

Yukon residents flying into Canada with COVID-19 symptoms must quarantine at their arrival destination, and those without symptoms are ordered to self-isolate for 14 days when they get home.

Yukon has asked everyone arriving in the territory, including mine workers, to self-isolate for 14 days.

The government has closed bars and limited social gatherings to 10 people or less.

Long-term care facilities are closed to visitors and volunteers, while all non-urgent or routine services, including lab tests, X-rays, physiotherapy and occupational therapy are suspended.

All dentists must also suspend non-urgent treatment until further notice.

The Northwest Territories declared a public health emergency on March 18, which has now been upgraded to a state of emergency.

It requires anyone who arrives in the territory from outside its boundary to self-isolate for 14 days.

Travel through all points of entry into the territory — both air and road — is prohibited.

The orders exclude essential service workers such as medical professionals or emergency services.

The territory has asked that all indoor and outdoor gatherings be cancelled — regardless of size or number.

Many businesses, including tour operators, gyms, museums and theatres, have been ordered to close.

The government has said it will help Indigenous families who want to head out on the land as an alternative to physical distancing. It will provide a $2.6-million grant to help families buy the proper gear and supplies to head out to fishing and hunting camps.

Nunavut declared a public health emergency on March 20, and it has been extended until April 16.

It has no known cases of COVID-19, but it has restrictions in place.

There is a mandatory 14-day self-isolation period at one of four locations in southern Canada for any resident that wants to return to Nunavut.

Critical employees who need to return to work must apply for an exemption.

All non-essential medical travel has been cancelled.

Public gatherings, including at playgrounds or parks and at religious, cultural or spiritual services is prohibited.

School staff in Iqaluit are working to ensure students in the capital of Nunavut don’t go hungry because of closed classrooms. They’re continuing to provide breakfasts to children in a way that follows physical distancing rules.