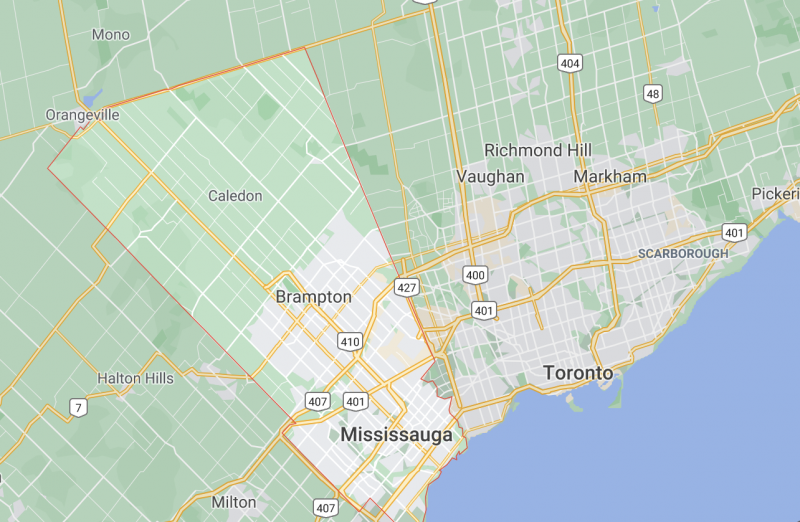 The Region of Peel consists of the municipalities of Brampton, Caledon and Mississauga. (Google Maps)

Officials in one of Ontario’s top COVID-19 hot spots are moving to temporarily close businesses with recent outbreaks of the virus in an effort to rein in surging case counts they said were fuelled by workplace spread.

Peel Region said Tuesday its public health unit will issue an updated order requiring businesses that have seen five or more linked cases in the past 14 days to shut down for 10 days.

Businesses could be told to close as early as Friday, and those affected will be contacted directly, it said.

Those deemed essential for the well-being of the community, such as businesses in health care and emergency child care, will be exempt from full closure, it said.

The move comes a day after the Ontario government rejected efforts to bring paid sick leave for essential workers and shut down non-essential businesses.

The province has faced increasing pressure from health experts and advocates to implement paid sick days and close non-essential workplaces amid a third wave that threatens to overwhelm the health-care system.

The governing Progressive Conservatives shot down Opposition motions on both issues Monday, saying they were waiting for the federal government to announce an expansion of its sick-day program.

Ontario’s top doctor, meanwhile, said Monday that the province could look into closing more non-essential businesses, but suggested there isn’t a “clear-cut answer” as to what is essential.

Provincial data released last week showed Peel Region — which includes Brampton, Mississauga and Caledon — had the highest COVID-19 positivity rate at 15 per cent, with Toronto coming in second at 11.3 per cent.

The region west of Toronto also had the highest number of weekly new cases per 100,000 residents, the data showed.

One of the public health experts involved in preparing the province’s COVID-19 projections said last fall that the virus is hardest to control in areas such as Brampton where the proportion of essential service workers is higher and households are larger.