Tragedy feels worse when it happens in your backyard: Remembering 2 fallen officers 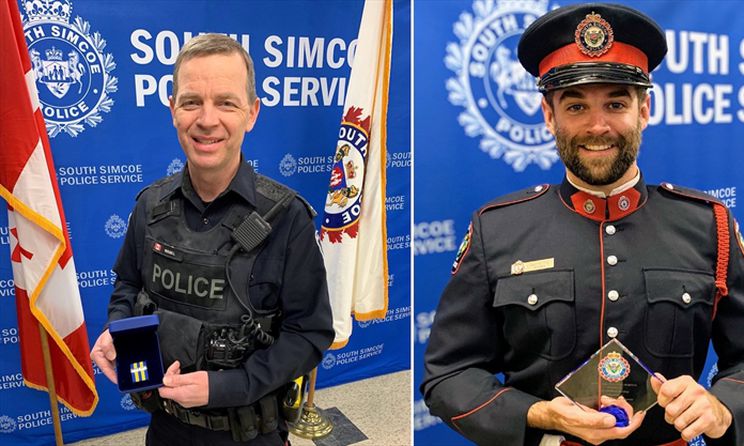 Const. Morgan Russell (left) and Const. Devon Northrup of the South Simcoe Police Service were killed in the line of duty on Oct. 11, 2022.

Tragedy always seems worse, somehow, when it happens in your backyard.

Workplace injuries and fatalities are often reported as statistics. But if you know the person, work alongside them or have met their family, the numbers fall away and gel into tangible people and actual lives.

Then the bulletin changed. Both officers had been pronounced dead and were members of the South Simcoe Police Service. That’s the force that serves my relatively small town, Bradford, and the neighbouring community of Innisfil.

But it caught me off guard to see that police service’s logo splashed across the national news, as it’s the one on the cruisers I see driving down my street when we walk our dogs.

I haven’t had a lot of interactions with police since moving here a little more than three years ago. There have been two, to be precise.

The first was when a cop knocked on our door, asking to see footage from our security camera, to help identify someone who had allegedly flashed a woman in a nearby walkway. We spent a few minutes watching videos on my phone, as he wrote down information. The cameras captured nothing useful.

The second was after my wife’s unlocked car was rummaged through in the middle of the night. They stole some prescription sunglasses and a couple of N-95 masks (even thieves are wary of COVID, apparently.) I called it in to the non-emergency line, primarily for the purposes of statistical reporting, and didn’t expect an officer to attend.

But one did. Knocking on the door an hour or so later, he asked if our cameras caught anything (they didn’t, yet again) and jotted down a list of what was missing.

“We might find it. They often dump this stuff in a ditch,” he said.

We joked around a bit before he returned to his cruiser.

A few days later, he spotted me at a local grocery store, said hello and asked how things were on my street.

The people behind the badge

It’s easy to forget, at times, the true danger of these jobs. John Van Dyke, the acting police chief of the service, talked about the two officers who were killed.

The men arrived at a residence in Innisfil at about 7:55 p.m. Tuesday night, he said.

“Upon arrival, two officers were shot inside the home,” said Van Dyke. “The wounded officers were rushed to a local hospital by emergency run where one of the officers died.”

The second officer, Russell, was airlifted to a trauma centre in Toronto, but also passed away.

“Word cannot describe our grief,” said Van Dyke, as he detailed the careers of the officers.

Northrup had been with the force for six years, and is survived by his partner, parents and many friends in the community. He was also a member of the service’s mental health crisis outreach and support team, in addition to the Emergency Response Unit.

Russell had been with the police service for more than three decades, and is survived by his wife and two adult children.

“This is personal for me,” said Van Dyke. “I went to police college with Morgan 33 years ago. This is a heartbreaking time for our police service.”

The work of first responders is inherently dangerous. When I interviewed Sheilagh Robinson, a former paramedic who was inducted into the OHS Canada Hall of Fame earlier this year, she said something that really stuck with me.

“The idea of a work refusal was foreign to me,” said Robinson. As a paramedic, you didn’t have the luxury of refusing to help someone because the work was unsafe.

Northrup and Russell worked under the same rules. Throughout their careers, they blindly went into situations where others wouldn’t to provide assistance and save lives.

They, now, are workforce statistics — added to the list of Canadian police officers killed in the line of duty. But here, in the communities of Bradford and Innisfil, they’re people.

And we’re grateful for the work they did.