OHS legislation: Reviewing the year that was 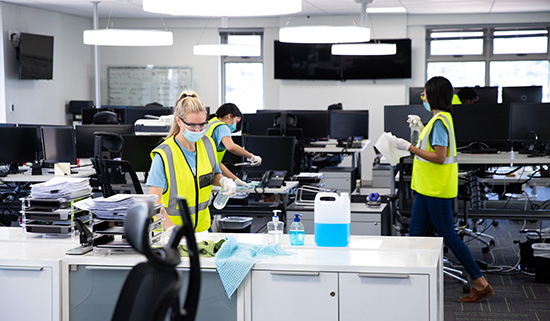 COVID-19 was again the major storyline for workplaces in 2021. (WavebreakMediaMicro/Adobe Stock)

The year 2021 saw not the end of COVID-19, but instead the continuation of uncertainty and a further shifting workplace safety reality, where vaccines became readily available and policies mandating their use were challenged.

For many in safety, it was not an easy (or fun) roller-coaster ride of a year. The rise and fall of case counts drove many to distraction and made keeping workers’ minds safely on task extra taxing — as did the rate at which effective change management needed to be implemented.

The scale and scope of risk related to safety related breaches and incidents also increased.

Not only did new safety legislation at the federal and provincial levels come into effect, but there was a $150,000 damages award for post-incident unsafe actions in a civil lawsuit that was confirmed by a court of appeal; a migrant farm worker was awarded $25,000 in damages after being fired for raising safety concerns; and employers continued to be punished with substantial penalties across the country at both the provincial and federal levels where incidents resulted in fatalities and/or life-altering injuries.

Highlighted below are these and other developments to help you and your organization safely navigate the twists and turns — both behind and ahead of us — as we roll into 2022 with an Omicron-driven fifth wave of COVID-19 gaining more and more momentum.

Omicron — and a shortened quarantine period in many parts of Canada — dominated headlines and headspace for many as 2021 came to an end.

Mandatory vaccination policies continue to become more and more prevalent with greater worker and public support for them, especially as there are typically less serious health outcomes for those that are vaccinated than those that are not.

Labour shortages are also on the horizon even with the shortened quarantine period, which is yet another reason for employers working to achieve safe workplaces during a global pandemic to implement a mandatory vaccine and/or test policy as another control for the serious workplace hazard it represents.

There are early signs of arbitral and court support for them if they are reasonable in that they are customized for that organization, reflective of — and proportionate to — the present risk profile in the community and nature and means of work being carried out, consistently enforced and compliant with applicable human rights, privacy and OHS legislation.

In Ontario, even where a constructor (like a prime contractor in British Columbia or Alberta) is engaged, an owner can nevertheless be an “employer” at the worksite, so says the Ontario Court of Appeal in a recent case.

As such, owners must use caution in both sending their employees to work sites they “own,” and in the level of control exerted over the work performed by contractors.

It is also important to note that the extent to which control is exerted will be a key element of due diligence.

The case says that the prosecutor need only prove an owner meets the definition of “employer” for those responsibilities to be triggered and regulatory liability to exist.

However, this case will be heard by the Supreme Court of Canada so stay tuned for more developments in this contentious and very important area.

In a recent Ontario case, a migrant agriculture-worker was awarded $25,000 in damages for unlawful reprisal after he was fired for raising COVID-19 health and safety concerns.

There is the prospect for this in multiple jurisdictions in Canada, including Alberta. Where any part of the employer’s actions are “tainted,” then the OHS regulator is likely to find a breach.

With these complaints, it is the employer that has the onus to show that it did not take a negative action against an employee.

In Alberta, an employer cannot take disciplinary action against an employee for raising a health and safety issue.

In this case, the $25,000 was for mental distress and loss of future employment income.

Drug testing and fitness for duty

An employer’s statutory obligation under OHS legislation and the Criminal Code may provide a legitimate interest for the employer to require drug and/or alcohol testing.

In certain cases, failing to test for drugs or alcohol may be a contravention of OHS and Criminal Code legislative requirements, even though the requirement for testing is not expressly set out in either piece of legislation.

Random testing has repeatedly been confirmed as a reasonable element of a rehabilitation process, in order to confirm fitness for duty.

That said, there remain limits on the unilateral imposition of consent forms, or “last chance” agreements. Each situation needs to be considered and addressed on an individualized basis.

Also, an employee may be reinstated (as a result of a grievance) despite positive drug tests if the tests were improperly administered or administered on improper grounds.

Where random drug and alcohol testing is a term of an employee’s employment agreement it will be reasonable and enforceable.

Fines continue to rise for OHS violations on the East Coast. The courts are taking a signal from the legislature and a previous increase in penalties.

In a recent case, the Nova Scotia Court of Appeal more than doubled a fine issued to an employer for a worker fatality.

This decision contrasts a 2019 OHS sentencing decision from Saskatchewan that rejected the notion that all sentences following a legislative increase to penalty amounts should also increase.

In further contrast, fine amounts are not necessarily rising at the rate that were expected in Ontario following the increase in maximum fines.

That said, a significant fine of $700,000 was recently imposed for two separate Ontario fatalities.

Where there is both a death and serious injuries to another worker, there can be both a high penalty and corporate probation.

A serious welding accident that caused fatal injuries to one worker and life-altering injuries to another resulted in a $300,000 penalty and two years of probation.

Typically the penalty amount is one-third to one-half of what it would otherwise be where there is probationary order (usually 18 – 24 months).

There are likely to be more prosecutions in British Columbia over the next year.

While British Columbia has traditionally relied almost exclusively on administrative penalties to address provincial regulatory violations under the Workers Compensation Act, there has been direction from government to change that approach and avoid the perception of “pay to play.”

A recent case involving a federally regulated employer, where one of the largest ever levied penalties ($250,000) was ordered, highlights how the fine after a prosecution can still result in a significantly lower penalty than a British Columbia administrative penalty for a provincially regulated employer.

Penalties are based on the nature of the violation and size of business, which is similar to the approach taken in British Columbia.

In British Columbia, it is much higher with the maximum administrative penalty being just under $700,000 for 2022.

However, 2021 was an “educational year” where no penalties appear to have been issued under the CLC. None were published online or otherwise, which is something the federal government has said will happen once they start to be issued.

In contrast, in British Columbia administrative penalties were issued again at the maximum allowable amount of $678,889.57 for 2021.

For a court to award punitive damages, it must determine that there was an independent actionable wrong and that there is a need to punish high-handed, malicious or reprehensible conduct.

A WCB/WSIB claim will be denied where an injury does not happen in the course of work, and a civil claim can be the result as was the case recently where “horseplay” led to a very serious injury that was not properly responded to.

In fact, it was the actions post-incident that resulted in the damages award. In this instance they were very significant at $150,000, which was upheld on appeal.

Another key takeaway is that where a supervisor instructs an injured employee to falsely report they were injured at home, such conduct may justify an award of punitive damages.

The new Alberta Occupational Health and Safety Act and the revised Code took effect on Dec. 1, 2021.

It has also been one year since the Work Place Harassment and Violence Prevention Regulations, SOR/2020-130, under the the Canada Labour Code, came into effect.

Those regulations required all employees to be trained by Dec. 31, 2021 in addition to a policy (and supporting procedures having been required to in place for Jan. 1, 2021).

A further key date to note is that the first annual report is due on March 1, 2022.

Loretta Bouwmeester is a partner with Mathews Dinsdale in Calgary and Vancouver.