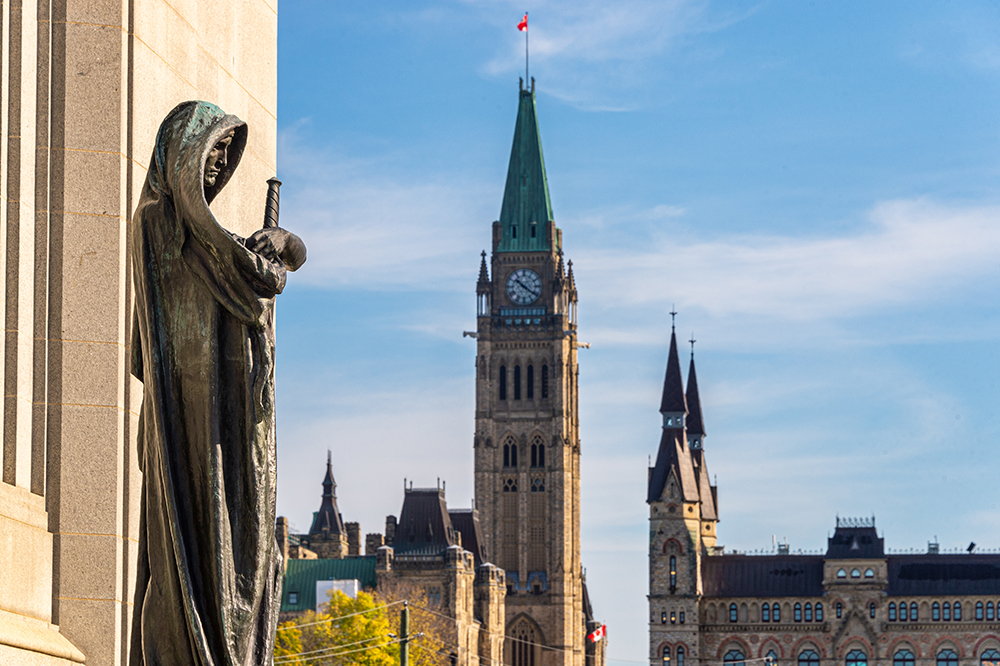 In front of the Supreme Court of Canada, the Statue Ivstitia – representing justice – overlooks Ottawa on Oct. 9, 2019. (mbruxelle/Adobe Stock)

In December of 2017, the Ontario government substantially increased the maximum fines for breaching the Occupational Health and Safety Act (OHSA). The corporate maximum tripled and the maximum individual fine quadrupled.

This prompted concerns that sentences would take a quantum leap because the maximum penalty is a sentencing consideration.

While that is a substantial fine, it is far below the high-water mark for a single charge which is $425,000, which was imposed under the prior maximum fine of $500,000.

The absence of a stark and immediate increase in fine amounts should not provide significant comfort. Larger employers and those with prior convictions will likely see more aggressive sentencing positions from Crown prosecutors.

Below are some key sentencing cases and steps that should be considered to manage the risks associated with increasing penalties.

Two recent cases are useful in identifying the circumstances that could attract a significantly elevated penalty, the restraints on such sentences and the sentencing implications of increased maximum fines.

In Ontario (Labour) v. New Mex Canada Inc., 2019 ONCA 30 (CanLII), the Ontario Court of Appeal issued a decision with aspects that should be seen as both concerning and helpful for employers.

In that case, the court was critical of a $250,000 fine imposed on a very small, financially tenuous employer after one of its workers was fatally injured.

Employers should note that the court was not concerned that the fine was disproportionate. It found the circumstances troubling and the fine was not out of line in that way.

However, the court found that the penalty departed substantially from amounts imposed in similar cases and was markedly more than necessary for deterrence.

In the absence of an explanation for this departure, the court found the penalty was too high. Absent a compelling explanation, New Mex requires similar cases to receive similar penalties.

There is also case law that rejects the notion that an increase in the maximum fine means higher fines are to be imposed.

In Saskatchewan, where health and safety legislation also provides for a $1.5-million maximum fine against a corporation, prosecutors argued that the increased penalties enacted in 2014 indicated that the provincial legislature intended fines.

This argument was rejected in R. v. Carrier Forest Products Ltd., 2019 SKQB 84 (CanLII), where the court held that an increase in the maximum penalty — without an increase in the minimum sentence or a prescribed penalty range — is more indicative of a need to ensure that fines could be meaningfully applied to very large corporations.

Helpfully for employers, the court went on to comment that fines imposed prior to the penalty increase could be considered for parity purposes.

Taken together, these cases suggest that the increase in maximum fines should not radically alter the sentencing landscape for most employers.

While there may not be an immediate, dramatic increase in fines, we anticipate that sentences will continue to escalate. It would, therefore, be prudent to manage the risk.

Aside from avoiding prosecution by implementing a robust health and safety system, there are a couple of key aspects:

Demonstrating compassionate steps: After an incident, employers and management frequently do things to assist involved workers or to prevent future incidents.

While there is no finite list of steps, these can include paying for a worker’s child care, providing contributions to the education of a worker’s children, arranging for travel and accommodation for a worker’s family, adopting practices and procedures that exceed legislated requirements, or publicly addressing an incident and the steps taken to prevent future incidents.

As long as what is done is not legally required and some proof of such steps is available, they should result in a lower penalty than might otherwise have been imposed.

Minimizing the record: Having a record of prior convictions is the surest way to attract an increased penalty because, generally, higher penalties are imposed for repeat offenders.

Good practice would be to minimize the number of convictions where possible by carefully considering the long-term implications of settling a matter that could be successfully defended.  That is often not an easy decision. It involves assessing a number of factors and is one that should be made in close consultation with experienced counsel.

Sentencing for OHS matters continues to evolve, but evolution should be equated with escalation.

With fines on an ever-upward trajectory, understanding and management of that risk also continue to escalate in importance.

Jeremy Warning is a partner with Mathews Disdale in Toronto.


Related
Workplace violence remains significant issue in Ontario
What if someone dies at work? 4 areas to consider
Power and Prejudice
Director and officer liability from COVID-19 workplace exposure