No parades, no concerts, no fun? COVID-19 will ensure a summer like no other 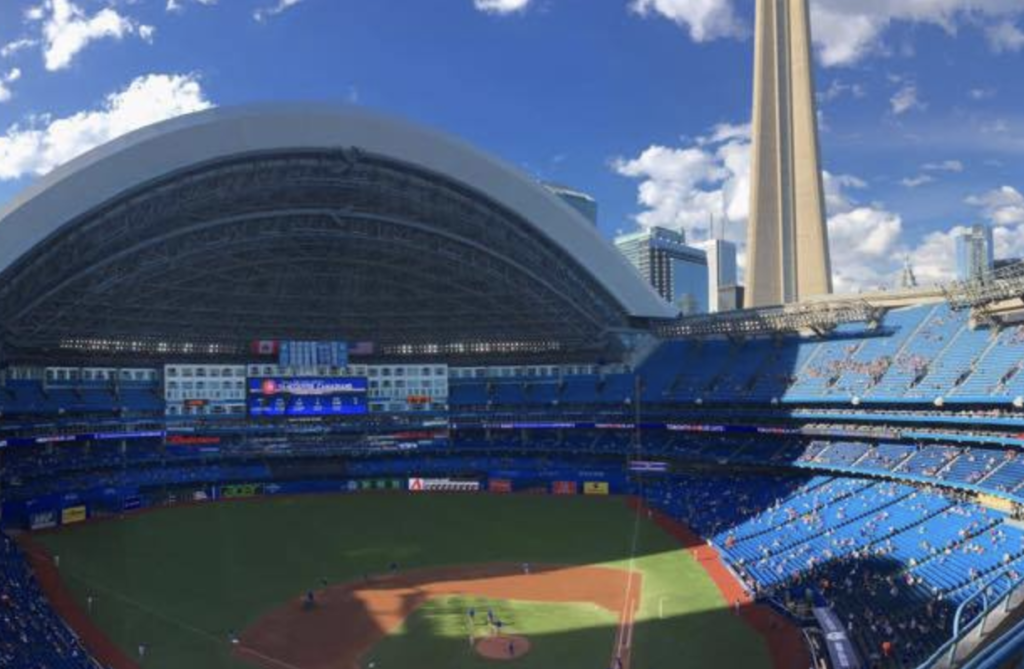 Mass summer gatherings, such as Toronto Blue Jays games, will likely not occur in their traditional format this year, according to experts. (OHS Canada)

TORONTO — From music festivals to carnivals to big screen blockbusters, COVID-19 has already put the kibosh on several summer highlights that define the season for many Canadians.

But while it’s likely that even more hot-weather past-times will be cancelled or curtailed, experts say that doesn’t mean summer 2020 has to be a dud.

Undoubtedly, we’re in for a summer like no other, says Matti Siemiatycki, director of the University of Toronto research institution, School of Cities, whose family has embraced videoconferencing and regular walks to cope.

COVID-19 restrictions have already cancelled all city-led major events, conferences and cultural programs in Toronto through June 30, including the Pride parade and Toronto Caribbean Carnival — massive street parties that typically draw thousands of revellers. Calgary Stampede organizers have nixed this year’s edition of the annual rodeo and exhibition, and Ottawa says its bombastic Canada Day celebrations will be transformed into a virtual show.

Meanwhile, popular folk festivals in Edmonton and Winnipeg have been axed, and it’s looking increasingly likely that family-friendly fairs including Vancouver’s Pacific National Exhibition and Toronto’s Canadian National Exhibition will be put on ice.

The prospect of a dull summer is better than the alternative, public health officials say, as a hasty move to lift restrictions could increase the rate of infection and deaths, and extend financial hardship throughout the season and beyond.

For city-dwellers, the possibility of a summer-long closure of parks, pools, recreation centres and playgrounds “is challenging culturally and psychologically,” says Siemiatycki, noting our long winters make the summer weeks especially precious.

“The summer really is festival season here in Canada, and to lose that is a significant cultural loss, as well as a financial loss,” says Siemiatycki, noting restaurants and the tourism sector will especially feel the blow.

“Whether it’s at sporting events or whether it’s at local festivals, there’s going to be a whole rethink — in the short term, at least — of how we engage and how we’re able to come together. And that has many implications for how our communities are stitched together and the commercial (and) financial dimensions of the recovery.”

Political and medical leaders have asked the public for patience while they mull how and when to ease restrictions, with Ontario Premier Doug Ford noting that even his 12-year-old nephew is hounding him for assurances that summer camp will proceed as usual.

B.C. health officer Dr. Bonnie Henry advised organizers of big events in her province to consider alternatives this year, and she urged individuals to scale back weddings and family reunions.

“Large parades, large mass gatherings where we all come together — those will not be happening this summer,” she said.

Saskatchewan, meanwhile, suggested looser restrictions could begin as early as May 4 in that province, while Prince Edward Island has said they could ease measures as early as May 1. COVID-19 cases and deaths in both provinces are on the lower end of national statistics.

Indeed, the impact of COVID-19 on summer fun will be felt in a myriad of ways.

The upheaval of professional sports will be a particular blow to diehard fans who build their social calendar around their favourite athletes’ schedules, says Siemiatycki, although even casual fans will likely miss the infectious hoopla that surrounds big events such as Wimbledon, the NBA Finals and of course, the Summer Olympics, which have been postponed to 2021.

Keith Dobson, a clinical psychology professor at the University of Calgary, says the loss of these events will impact each person differently, but he expected they would intensify feelings of loss that are already emerging in many households.

He pointed to “the paradox” of warm weather coinciding with restrictions that limit our ability to enjoy the weather.

“In a season when we should be outside and enjoying ourselves we are going to be frustrated,” says Dobson, who fears that could push some people to break the guidelines and head to the beach, for instance.

“You can fairly safely predict that, in fact, rates of depression will go up as the summer comes on.”

While large-scale summer events provide a financial boost to many entrepreneurs, they also serve an important role in forging neighbourhood connections and civic pride, Siemiatycki notes.

Then there are those events that hold deep personal meaning for some — like a food festival that celebrates one’s cultural heritage or an annual charity marathon that honours a loved one.

Dobson acknowledges that the notion of summer in general holds an outsized place in the hearts of many adults because it is a frequent backdrop for some of life’s sweetest memories — graduations, weddings, family road trips, cottage barbecues and team championships.

He cautions parents against letting nostalgia colour their expectations for summer 2020, especially if they had hoped to forge similar memories with their own children this year.

“Parents have to be really careful not to grieve publicly in front of their children,” says Dobson, also a researcher for the Mental Health Commission of Canada.

He stresses the importance of maintaining a regular sleep schedule, good eating habits and a daily routine to stave off boredom and frustration.

Dobson also points to an array of online social events that have emerged to address dwindling public events, such as live streaming music concerts and virtual running races.

Look for opportunities to create memories in new ways, Dobson suggests, and don’t wallow in what might have been.

Many kids are already great at this, he adds.

“What they can remember, hopefully, is the positive time spent with their parents in the Summer of 2020.”