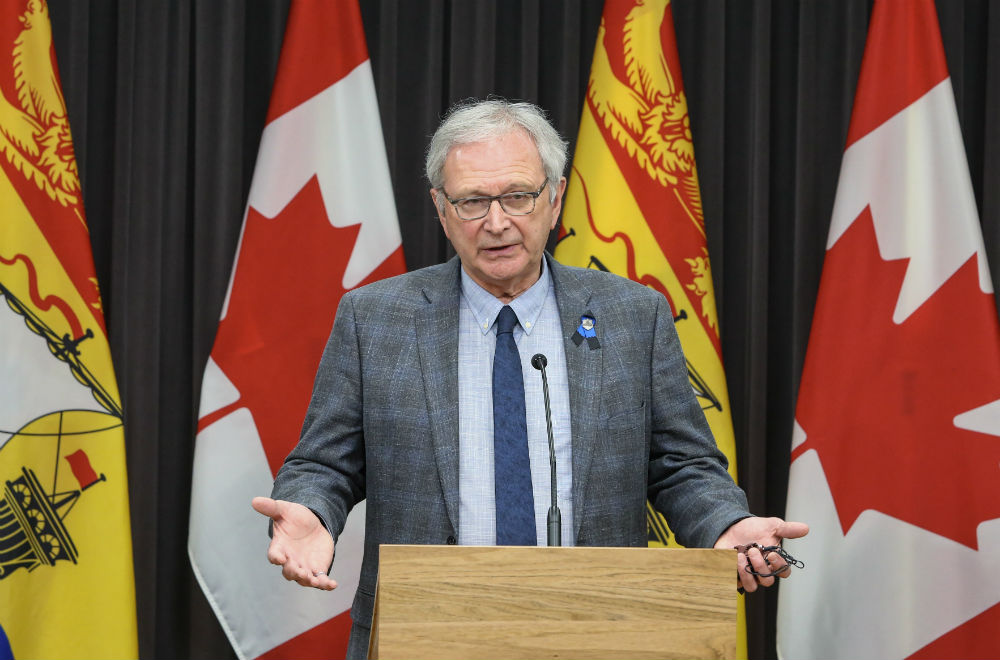 By Keith Doucette in Halifax

FREDERICTON — New Brunswick has presented its four-phase plan aimed at gradually reopening the province and easing restrictions put in place to contain COVID-19.

Premier Blaine Higgs told reporters Friday the first phase is effective immediately. Certain low-risk outdoor contact between people is now allowed, including limited play on golf courses as well as fishing and hunting. Physical distancing, however, is required for all outdoor activities, he said.

“It is understandable that New Brunswickers are getting increasingly anxious to return to some sense of normalcy,” said Higgs. “With proper physical distancing people can now enjoy outdoor spaces including parks and beaches.”

Higgs said two family units will also be allowed to interact as part of a so-called “two-family bubble.” Two families will need to agree to only come into contact with each other.

Carpools will also be allowed with a limit of two people per vehicle with the passenger riding in the back seat. Post-secondary students will be able to access their campus if it’s determined safe by the school.

As well, Higgs said the province will allow outdoor church services, as long as people remain in their vehicles spaced two metres apart.

“These are first steps,” he said. “Large gatherings such as festivals and concerts will not be allowed until after Dec. 31, though this is a subject that will be reviewed depending on circumstances.”

The changes were announced as chief medical officer of health, Dr. Jennifer Russell, reported no new cases of COVID-19 for the sixth consecutive day keeping the province’s total of confirmed cases at 118.

“I will not hesitate to recommend the reimposition of the restrictions being loosened today if the outbreak worsens,” she said. “Any significant acceleration of the disease curve will trigger a new round of restrictions to public movement and activity.”

Higgs said the second phase of the plan could be implemented within two-to-four weeks if the first phase goes well. Phase two would see a resumption of elective surgeries, and allow the reopening of daycares, offices, restaurants, ATV trails and seasonal campgrounds.

Within three-to-four weeks of no signs of a resurgence of the virus, openings could be extended to include such things as church services, dentistry services and fitness centres.

Higgs said the final phase, to include large gatherings and sporting events, would likely only come after a vaccine is available, or more is learned about how to protect people from the virus.

Under Saskatchewan’s plan, dentist offices, optometry clinics and physical therapy providers can open starting May 4, while some retail stores might be allowed to operate as of May 19.

Officials in Prince Edward Island have also said some outdoor activities and elective surgeries could restart in Canada’s smallest province in early May.

The gradual reopening in New Brunswick stands in contrast to neighbouring Nova Scotia, where that province reported 23 new cases of COVID-19 Friday, bringing the total number of confirmed cases to 850. There have been a total of 16 deaths so far.

An outbreak in long-term care homes has led the province’s chief medical officer of health to warn that unlike some other provinces, Nova Scotia is still a “long way from returning to normal.”

Dr. Robert Strang said Thursday it would be several more weeks before Nova Scotia could begin easing restrictions. When that happens, he said, it will be carried out through a “phased approach.”