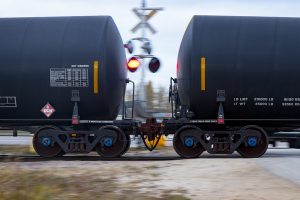 A railroad freight car manufacturer in Hamilton has been fined $140,000 following an accident that killed a worker.

On Sept. 2, 2020, a crane operator was connecting a lift-assist device, called a turnover pick-up, to the end of a railcar in production at the National Steel Car’s Hamilton factory.

The worker was using an overhead crane to lift the pick-up into position. While attempting to attach the pick-up to a coupler box at the end of the railcar, the crane’s hoist chain slackened, which caused its hook to slip out of the pickup.

Section 51(4)(a) of the Regulation for Industrial Establishments requires that the hoisting controls for an overhead crane, when operated from a place other than a cab or stage, be located so they can be operated at a safe distance from the load being lifted.

National Steel Car Limited/Wagon D’Acier National Limitee contravened Section 25(1)(c) of the Occupational Health and Safety Act by failing, as an employer, to ensure that the measures and procedures of Section 51(4)(a) of Ontario Regulation 851 were carried out.

The company pled guilty. The court also imposed a 25 per cent victim fine surcharge, bringing the total to $175,000.