Ford says there are no plans to roll back economic reopening, despite new cases 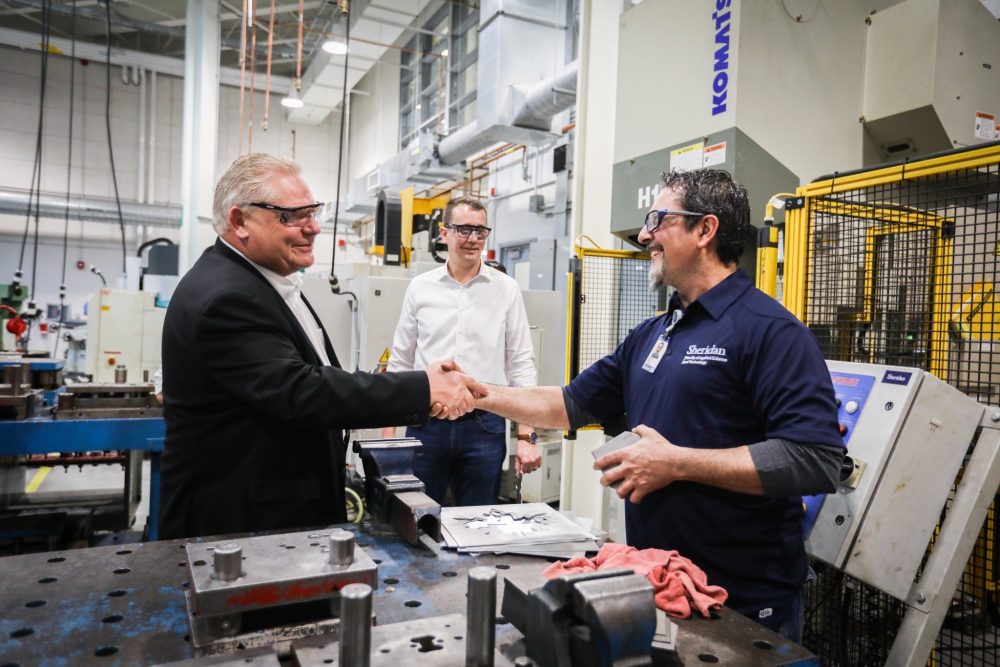 Ontario Premier Doug Ford said he does not plan to pull any regions back in terms of economic reopenings. (Photo courtesy of Minister McNaughton’s Office)

TORONTO — Ontario has no plans to pull any regions back a step in the province’s economic reopening process despite new outbreaks in some areas that have moved into Stage 3, Premier Doug Ford said Tuesday.

Speaking at a news conference in Ajax, Ont., Ford said the new cases don’t amount to a serious surge, adding he will rely on the advice of the province’s health-care command table in making any decisions related to the COVID-19 recovery plan.

“Right now we have to look at every single region … but I don’t think it’s anything that spiked too badly,” he said.

Two cities in Stage 3 — Ottawa and Sudbury — have reported fresh cases of the novel coronavirus in recent days.

Ottawa reported 25 cases on Tuesday, and Sudbury reported eight on Monday, seven of them in people under 19.

A spokeswoman for Public Health Sudbury & Districts said one of the seven contracted the virus while travelling, and the other six were in contact with that person.

The eighth person, a 30-year-old man, was infected through contact with a separate travel-related case, Karly McGibbon said.

McGibbon said there has been a “huge shift” in the demographic testing positive for the virus, with a marked increase in cases in the under-19 population. Previously one two of the city’s 60 cases were in that age group, but as of Monday, those under 19 make up nine out of the 12 active cases, she said.

“It’s not their fault, people are not maliciously spreading the virus to others,” she said.

Ottawa’s medical officer of health, meanwhile, urged residents to consider what is causing the new cases.

“Today is a good day to address what is leading to the rise — avoid socializing with people outside your closed social circle of 10, unless physical distancing, & stay home if sick,” Dr. Vera Etches said on Twitter.

The province also announced the construction of a new long-term care home at the Ajax Pickering Hospital, a project it said would add 320 long-term care beds and be completed sometime next year.

The project is part of the province’s recently announced Accelerated Build Pilot Program, aimed at increasing long-term care capacity, and will be carried out in partnership with Lakeridge Health and Infrastructure Ontario.

Ontario reported 111 new cases of COVID-19 on Tuesday, including the Ottawa cases, and four new deaths.

Windsor-Essex, which has seen a number of outbreaks on farms, reported 22 more cases, while Toronto reported six.

The province is slated to make an announcement Wednesday on when Windsor-Essex, Toronto and nearby Peel Region will progress to Stage 3, which allows nearly every business and public space to reopen with health restrictions in place and increases the permissible size of social gatherings.

Health Minister Christine Elliott said 27 of the province’s 34 public health units are reporting five or fewer cases, with 16 reporting none.

The provincial government said it was able to complete 17,334 tests the previous day.

It also said 96 people are in hospital — up 14 — because of the virus, including 31 people in intensive care and 18 on ventilators.

With files from Jake Kivanc