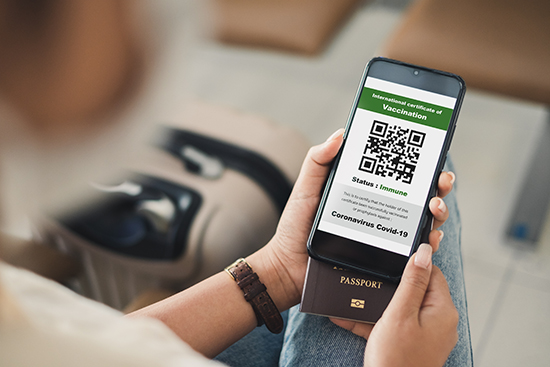 Quebec announced last week that it would require Quebecers as of September to show proof of vaccination in order to access non-essential services in parts of the province where COVID-19 transmission is high. (Nattakorn/Adobe Stock)

OTTAWA — Immigration Minister Marco Mendicino says fully vaccinated Canadians will soon be able to get a government document that will certify their COVID-19 vaccine history for the purpose of international travel.

Ottawa has been floating the promise of such documents for months and Wednesday’s announcement moved the needle on the plan only slightly, with an explanation that the document should be ready by the “early fall” and will be digital with a paper option for those that wish.

It is not intended for use domestically but could be if provinces choose to do so.

Mendicino says it will include data on the type of vaccines received, the dates and the location they were given.

“I want to take a moment to thank all Canadians who’ve rolled up their sleeves over these past months,” he said. “As more and more are getting vaccinated they are planning for life in a post-vaccinated world, including the safe return to travel.”

Vaccine passports aren’t entirely new. Yellow fever certificates have been used for years for travellers going to or from countries where that illness is common. The COVID-19 vaccine passports will be much more widespread.

Dozens of countries around the world have COVID-19 vaccine requirements for travel and many have now launched their own version of a vaccine passport. Most, like the European Union’s “green pass,” are digital, while others, like the Japanese version unveiled in late July, are starting on paper.

Canada has already been using the ArriveCAN app for travellers coming into Canada to upload their vaccination status. Since mid-July, Canadians who are fully vaccinated can avoid quarantine upon their return to the country by using the app.

The official digital passport will however use take data provided by the provinces and territories, who hold the vaccine records of their residents.

Intergovernmental Affairs Minister Dominic LeBlanc said the issue has been raised at least three times in recent first ministers’ phone calls, and the provinces were all reacting positively.

“We have been having ongoing and very collaborative constructive conversations with the provinces and territories to ensure that we can safely receive from them the necessary information on which Canadians are immunized,” he said. “And our job as a national government will be to then provide Canadians with this ? internationally recognized credential.”

Canada’s border reopened to fully vaccinated Americans on Monday, and the plan is to allow all fully vaccinated foreign travellers in next month. The border closed to most foreigners and non-permanent residents in March 2020.

Quebec is introducing a provincial passport next month that will be required for people who want to attend public events, go to the gym, or frequent a restaurant or bar.

Manitoba has a vaccine card that is either digital or on paper, which provides proof of vaccination. The province has not mandated vaccines but some events require it, including Winnipeg Blue Bombers games.

Prince Edward Island has a PEI Pass that exempts vaccinated P.E.I. residents from isolating when they return to the island.

Ontario and Alberta have both said they will not provide provincial vaccine passports or make vaccination mandatory for anything, while other provinces have been more open to the notion of at least having a passport option.

LeBlanc said the federal government only has the mandate to handle a passport for international travel purposes, but that doesn’t mean the document couldn’t be used for more things.

“If provinces wish to work with us in order to use our federal credentials within their province, well, we would be happy to work with them.”