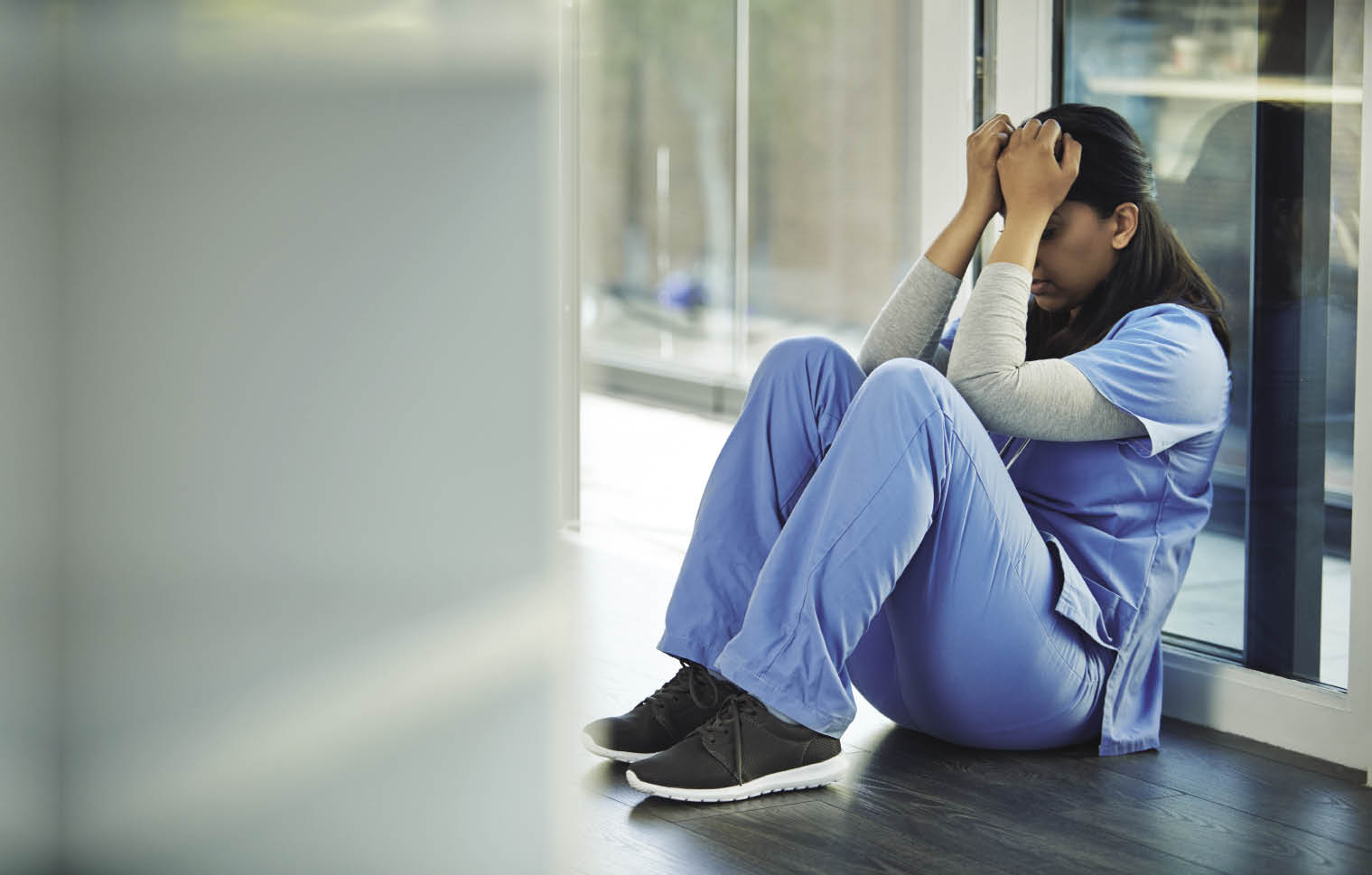 Violence against health-care workers is a significant workplace health and safety issue in Canada. (AJ_Watt/Getty Images)

A devastating incident on a cold Toronto night in Jan. 2014 proved to be a watershed moment for the Centre for Addiction and Mental Health (CAMH) in its efforts to combat violence against workers.

A registered practical nurse was attacked from behind in a hallway by a patient who had a history of violence and was not following the prescribed medication plan. A co-worker who intervened was also injured and as a result, both workers suffered physical and psychological injuries. They never returned to work.

“There was blood all over the walls,” according to Nancy Pridham, president of the Ontario Public Service Employee Union (OPSEU) Local 500. “(The nurse) was beaten with a fire hose — the end of a metal fire hose — and kicked repeatedly.”

“My member was actually pulling her back into the nursing station, screaming ‘She’s dead! She’s dead!’” added Danielle Latuilippe-Larmand, president of the Ontario Nurses’ Association Local 54.

“At that point, we realized that there was a lack of knowledge around health and safety,” she said. “The scene was cleaned up. Pictures were not taken. The MOL (Ministry of Labour) was not contacted and it was a critical injury where the nurse was unconscious — severely beaten unconscious.”

The aftermath of the incident was wide-ranging.

The patient was charged by police and convicted for assault. CAMH was fined $80,000 by the MOL for failing to develop and establish measures and procedures including safe-work practices to protect workers on night shift.

And it was the moment CAMH began the road towards solidifying its occupational health and safety practices in this area.

The two years previous included a number of violent episodes at CAMH, and both unions were attempting to work towards change, said Pridham.

“I don’t believe that there was any will in the organization… at that time,” she said. “There was no will to tackle the issue of violence. In fact, Danielle and I were told repeatedly that we were stigmatizing our patients.”

The violent incidents were not unique to CAMH, however, said Pridham.

“It was happening everywhere,” she said. “These are not calm, casual incidences we’re speaking of. These are incidences of extreme violence.”

“We started to raise the issues here… and that resulted in other people coming along.”

In 2014, there was not a lot of strategy on managing mental-health violence, admitted Bridgette McKenzie, manager of health, safety and wellness at CAMH.

“(The 2014 incident) forced us to make changes — not only to how we view mental health within the organization, but also having the right people at the table,” she said. “CAMH was a catalyst in getting a lot of the other hospitals on board in managing mental health.”

And in 2015, this transition began to happen. 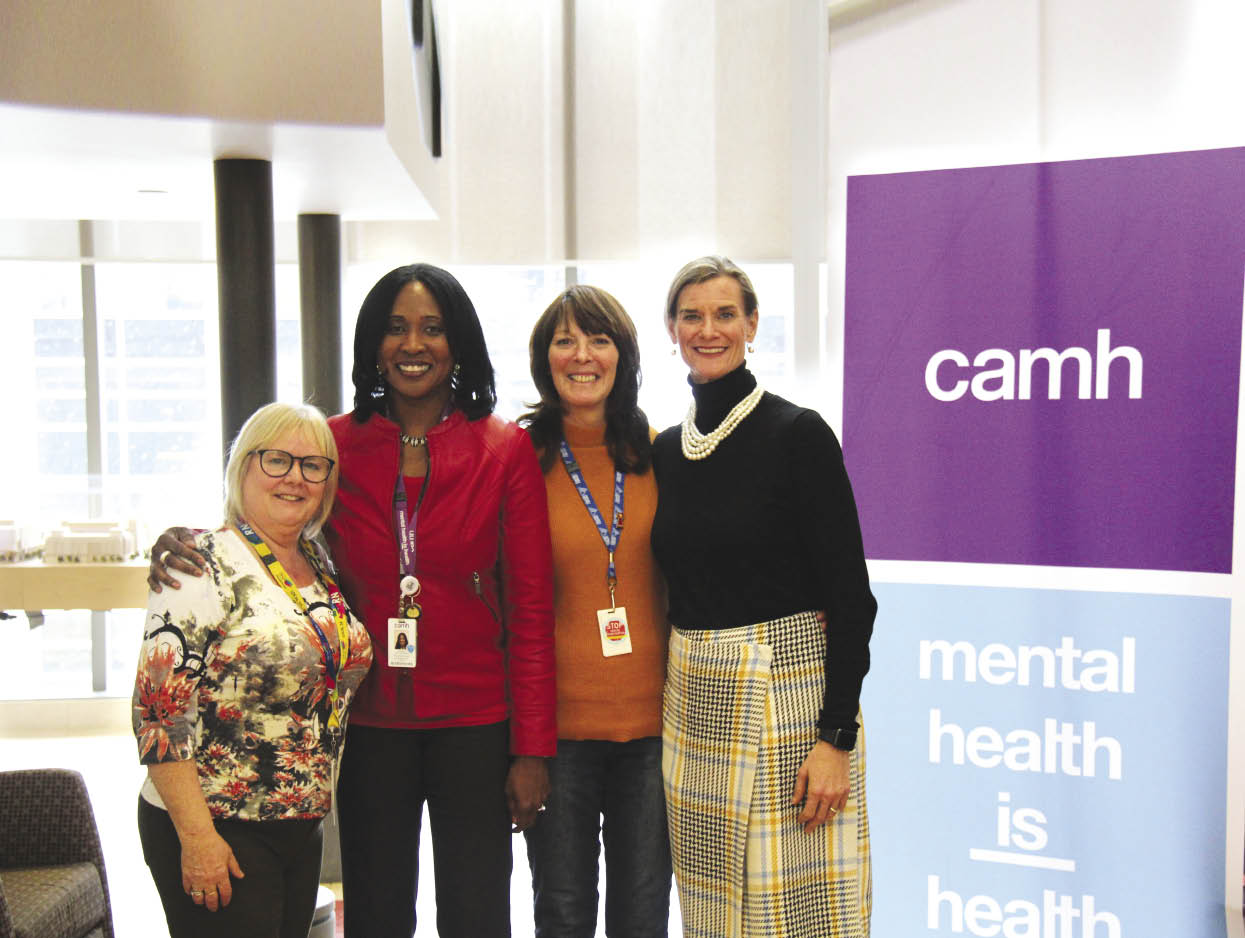 From left: Danielle Latuilippe-Larmand (ONA Local 54), Bridgette McKenzie (CAMH), Nancy Pridham (OPSEU Local 500) and Carrie Fletcher (CAMH) have worked tirelessly over the past number of years to protect workers at the Centre for Addiction and Mental Health in Toronto. (Marcel Vander Wier/OHS Canada)

“That was one of the best things that happened to us,” said Pridham, noting that JHSC meetings finally became meaningful. “We had real leadership at the table who were willing to carry out and undertake recommendations that have been made at the table, and there was some real investment in occupational health and safety.”

In partnership with then-provincial Labour Minister Kevin Flynn, CAMH CEO Catherine Zahn also ordered that all incidents of near misses, first aid, time lost and medical aid be reported to the MOL on a go-forward basis, said McKenzie.

“It was a lot of work for the health, safety and wellness department,” she said. “But we started seeing a lot of changes because then staff knew that something was being done, that the Ministry of Labour was aware of all the incidents that were occurring.”

“We did that for a period of time, so that staff would know there was a true buy-in from leadership, that we were serious about making changes within the organization.”

Alongside full transparency into the organization’s incidents, further practical steps included encouragement from CAMH and affiliate unions that all worker members of the JHSC become certified at no charge to them.

Annual inspections were completed and JHSC members began to wear tags identifying their certification when visiting units. A poster campaign was initiated to broadcast safety tips; an annual Safe and Well day was launched; a wellness centre was established to provide staff therapeutic opportunities alongside a cope line for real-time therapeutic assistance.

“There was real recognition that the psychological trauma of both witnessing and hearing about repeated violent episodes was actually impacting the membership greatly,” said Pridham.

In July 2016, the Ministry of Labour’s ruling came down on CAMH for the Jan. 2014 incident, including a major fine.

The decision spurred change — from proper lighting to flagging previous and current risks of patients to having nurses work in pairs, said McKenzie.

De-escalation techniques were refreshed. An external group was brought in to complete total-risk assessments with all of the subsequent recommendations ordered for implementation by Zahn.

In 2017, a violence committee was formed at CAMH, and momentum took off from there — so much so that some employees began to balk at some of the increased protections, said Latuilippe-Larmand.

“People get used to doing business the way they’re used to. And when you ask them to do it differently, sometimes people see it as ‘Oh, you’re just being silly,’” she said. “It changed the culture.”

The shift in mindset and partnership between all parties   was critical as CAMH moved towards workplace safety, said Carrie Fletcher, vice-president of people and experience at the hospital.

While CAMH couldn’t always do everything the unions requested due to budget restraints, a transparent, give-and-take relationship paved the way, she said.

“It’s having that open, honest relationship that you can say, ‘Guys, we simply don’t have the money for this… so, how are we going to come up with some creative solutions to make this happen? Or what are we going to need to pull from?’ That’s where the partnership is key at the end of the day.”

“It’s the shift in mindset that you can work together,” said Fletcher. “It doesn’t need to be adversarial, and we’ve seen that even spill over into our labour relations.”

While the two sides haven’t always agreed, renewed trust has continued to be the foundation, she said.

“Union people have got to figure out how to compromise, as well,” noted Pridham.

CAMH’s OHS team has been much more involved in workplace violence situations since 2016, said McKenzie.

“There was a time where things would happen and I’d hear after the fact,” she said. “Now, it’s about collaboration; it’s about partnership. We’re being more proactive as opposed to being reactive.”

And while violent episodes will always be a threat, the organization has worked hard to be proactive on this issue.

“It’s not that the violent patients are going to go away, but the manager’s response, or the leadership response in the organization needs to change,” she said. “You need to listen to your workers, and you need to take action to make them less afraid.”

This case study was published in the Jan/Feb 2020 issue of OHS Canada.