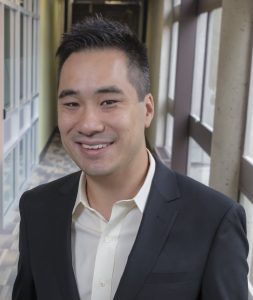 Steven Mah, 36, is a prevention officer at WorkSafeBC in Richmond, B.C.

Since the start of his health and safety career, Steven Mah has demonstrated a strong commitment to the profession, evidenced by his educational, professional and volunteer activities supporting the practitioner community.

While maintaining his work responsibilities at WorkSafeBC and continuing his academic pursuits, he also volunteered with the BCRSP, assisting with CRSP candidate interviews in the Vancouver area.

Alongside holding his CRSP designation, Mah is a Chartered Fellow of the Institution of Occupational Safety and Health (CFIOSH), with headquarters in the United Kingdom.

His dedication to his fellow officers and peer mentorship is also of recognition, and Mah is known as the “go-to” for training new officers and providing guidance.

His graduate studies focused on developing social and emotional intelligence competencies for OH&S professionals, and his findings were presented to the CSSE.

Mah’s rise in health and safety came unexpectedly, he admitted.

“Coming out of high school, I had no idea that this career field even existed,” said Mah. “While in university, I was working at a warehouse and witnessed a pretty significant incident.”

“As a shop steward, I was part of the in-house incident investigation and external workplace inspection. Participating in those events opened my eyes to the field of health and safety. Shortly after, I shifted the focus of my studies from psychology towards environment, health and safety.”