Time for Canada, U.S. to get serious about how, when to reopen border, experts say

Joint strategy could include proof of vaccination, antibodies 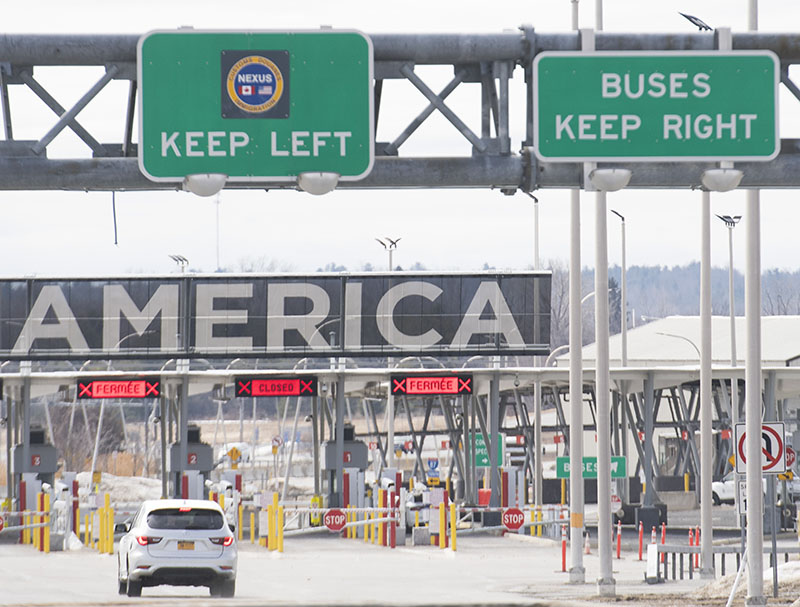 WASHINGTON — A panel of experts and powerful political luminaries from both Canada and the United States sounded the alarm Thursday about what they consider an urgent need to get serious about reopening the shared border.

A task force assembled by the Washington-based Wilson Center’s Canada Institute gathered several international trade and travel experts to sound off on what needs to happen, and why, and when.

The overwhelming consensus: time is rapidly running out.

The pandemic has produced no comparable images, and so failed to instil in people and government alike the same degree of alarm, said McLellan, a member of the task force.

After 9/11, “there was urgency, there was fear, there was a degree of panic on both sides of the border, for obvious reasons,” she said.

“Every minute on the news, that visual, over and over again, was so powerful in terms of helping Canadians and Americans understand there was something profoundly different here — something somebody had to fix.”

In addition to the well-documented economic consequences, particularly among communities near the border, the year-long travel restrictions are taking a mental toll, the task force heard.

“I think some of the biggest impacts are the social costs that we just can’t monetize, like missing the birth of a child, or the death of a loved one,” said Laurie Trautman, director of the Border Policy Research Institute at Western Washington University in Bellingham, Wash.

“I think a lot of that part of the impacts, which are experienced across regions in the US and Canada, are really overshadowed by the impacts that we can monetize.”

Animosity towards travellers an issue

Former Quebec premier Jean Charest, a task force member, noted the sustained and “brutal” level of Canadian animosity towards the idea of travellers from the U.S. — an out-of-character attitude he attributed in part to the tenure of former president Donald Trump.

“I was struck by how Canadians were overwhelmingly opposed to Americans traveling to Canada,” Charest said.

“The attitude of Mr. Trump sort of runs contrary to the grain in Canada, where people are more reserved, and maybe a little more subdued…. I’m hoping Mr. Biden’s election will change that, but what about the very short term?”

Alan Bersin, a former chief diplomatic officer of the U.S. Department of Homeland Security and member of the expert panel, laid out a detailed multi-pronged strategy that the U.S. and Canada need to jointly embrace.

At its core, he said, would be some form of electronic system that would allow travellers to prove either that they have been vaccinated or that they are equipped with the antibodies that come from having contracted COVID-19.

Such a system would need to be science-based, engender public confidence, prioritize high-risk and low-risk travellers and include some form of preclearance mechanism to minimize border congestion.

“The main difference that we face now, in the wake of the pandemic, is that we’re not, as we were after 9/11, looking for needles in haystacks,” Bersin said.

“The new challenge is that we have to take contagious disease into account — we have to look at the entire haystack, and develop screening procedures.”

Most critically, Bersin said, it would need to be a bilateral effort to ensure both countries are fully committed to the effort.

Several panellists floated the idea of a bilateral commission that could focus on the challenge of bringing border procedures, processes and technology into the 21st century — especially given the likelihood that the need is likely to long outlast the current pandemic.

“This is not a black swan event,” Bersin said.

“This is not something that we shouldn’t predict. In fact, it’s very predictable in a global age, and we need to build our border protocols to have the capacity to handle it.”

The panel consulted with a number of members of Congress, including New York Rep. Brian Higgins, who has been pressing Biden to begin focusing now on a process that would allow the border to reopen by early July.

Biden has already floated the idea that Americans might be able to gather in small groups by July 4, provided the U.S. can keep up what has so far proven to be an impressive vaccination pace.

Indeed, the White House confirmed Thursday that it is working on a deal to “loan” 1.5 million doses of the Oxford-AstraZeneca vaccine, as yet not approved for use in the U.S., to Canada, where it has already been cleared.

Getting closer to vaccine “parity” would be a “critically important” step towards allowing the border to reopen, Higgins said in an interview.

“We have to help each other here because we have a mutual objective, and that is our economies are deeply integrated, the United States and Canada, and our life quality is deeply dependent on one another.”

Higgins said he wants the two countries to expand what they consider to be “essential travel” and to develop a system that would allow people who have been vaccinated to cross the border.

“I just think that this has become too much. And I think people of goodwill … can come up with an agreement, at the very least, to expand the category of who is an essential traveller, toward a full opening of the border.”