In the face of an unprecedented pandemic, Canadian employers stepped up to help

As the COVID-19 pandemic rained down hard on Canadian workplaces and workforces, employers across the country stepped up.

While governments of all levels worked to protect their most vulnerable citizens and health-care facilities through a nationwide economic shutdown, manufacturers pivoted quickly to begin providing appropriate personal protective equipment (PPE) to the front lines of the pandemic. As the COVID-19 pandemic rained down hard on Canadian workplaces and workforces, employers across the country stepped up.

Other organizations donated excess supplies to workers in need as part of a heroic effort to flatten the curve and protect health-care workers and other essential employees.

In March, the federal government called on businesses and manufacturers to help deliver critical health supplies. Thousands responded by offering expertise and expanding capacity to meet the country’s need for PPE.

“Canadian companies are answering the call to provide critical support to our health-care workers who are on the front lines of our country’s fight against COVID-19,” Prime Minister Justin Trudeau said in April.

“We’re going to get through this together by leaning on each other and protecting our frontline workers.”

In May, with the country beginning to emerge from the pandemic, here’s a look back at the ways in which four companies across Canada took it upon themselves to help. 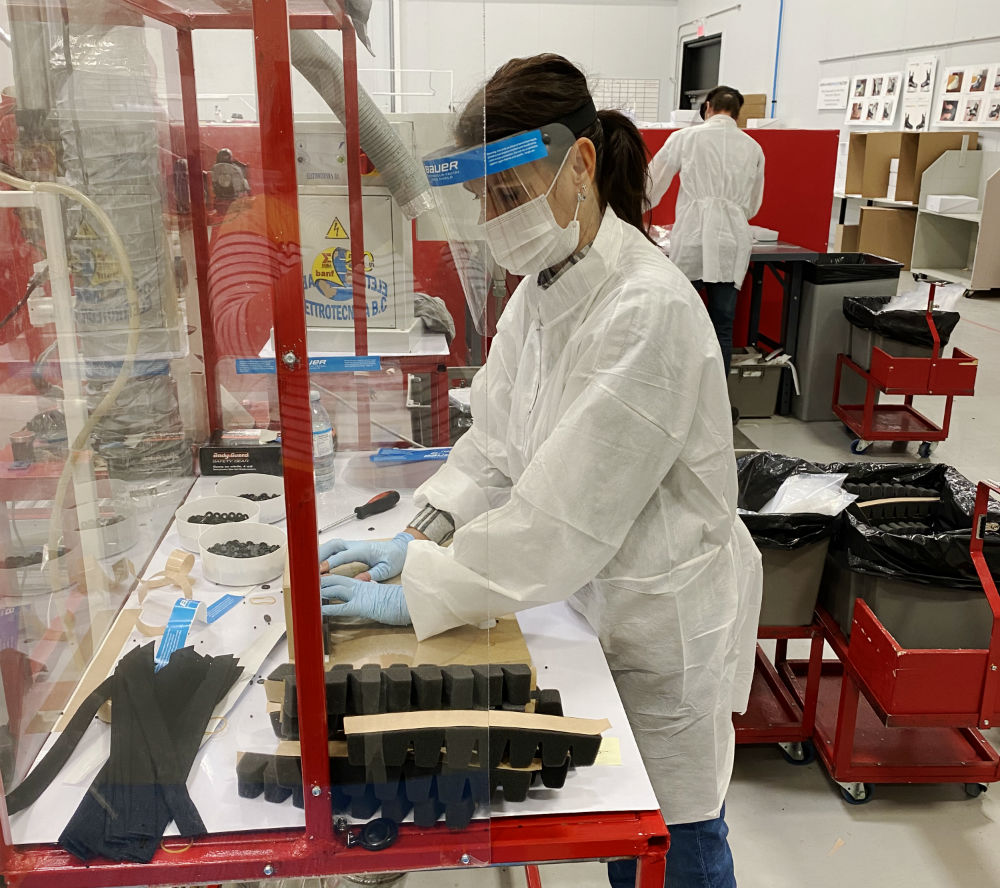 It was a plea from the prime minister that caused Bauer Hockey to sit up and take notice.

“We had a ton of different ideas at the beginning,” he said. “In ice hockey, we’re committed to protect our players. We said, ‘How can we protect our first responders?’”

“Of course, at the beginning when we started this project, we had no clue of the magnitude of the need.”

Bauer’s face shields followed in the footsteps of its hockey visors, said Bourgeois.

Following a review of protective products already on the market, Bauer added its knowledge on head metrology and moved to build a face shield offering equal parts comfort and protection.

With the need for PPE at an all-time high, Bauer went on to share its prototype online, he said.

The zigzag-shaped foam included in the Bauer solution is meant to allow face shields to form perfectly to the user’s forehead, said Bourgeois.

By late April, the factory was producing 200,000 shields per week, many of which were shipped for use by the federal government, Quebec hospitals and frontline health needs in other provinces, he said.

Pivoting away from skates to masks — skate production was later temporarily paused under a provincial government order — required some swift changes in production and safety measures, said Bourgeois.

Typically operating with 60 to 80 employees building skates, staff levels dropped to 40 during the COVID-19 pandemic, he said.

“We don’t want people to be at risk or get a transmission of the virus.”

All Bauer-manufactured shields were cured in an oven prior to being shipped, noted Bourgeois. “We’re not taking any risks.”

A commitment to agility was critical, as was locating enough raw materials to produce the masks, he said.

“From Day 1 to today, the line is totally different,” said Bourgeois.

“Now it’s better because it’s more in control, but the first week of the pandemic, the need and people calling us and almost crying… We feel proud of what we’re doing, but at the same time we have mixed emotions — feeling sad with the situation.” 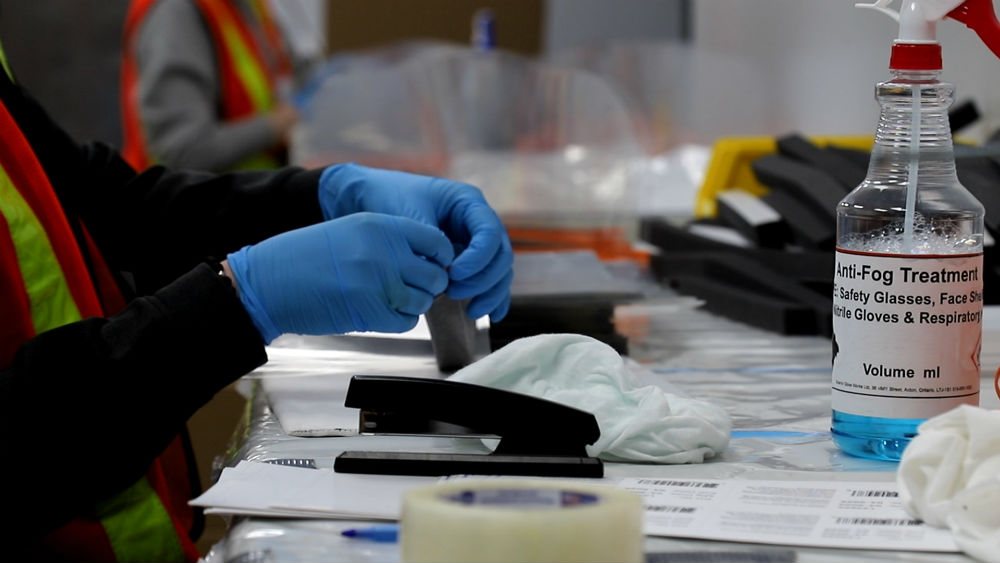 “Every day, our mission is to try and protect workers,” said company vice-president Joe Geng. “That was basically the idea. ‘What can we do? Because we have a lot of capabilities and how do we shift to try to help?’”

Hand-sanitizer production was the next addition to the Superior Glove fold, followed by mass production of cloth masks at its Newfoundland facility, he said.

“It kind of felt like every couple days I was getting an email that we’re getting into a new product line.”

With a food-safe environment needed, staff with engineering and other related experience stepped up, he said. While staff faced continual bottlenecks due to the rapid pace of change, they stuck with it and continually came up with solutions.

Support from their existing clientele gave the company confidence to go ahead on the quick remodel. Appropriate site and product licences to operate were also applied for and responded to quite rapidly, he said.

One room required an upgrade to epoxy flooring to ensure it could be sanitized more regularly.

It was locating raw materials for hand sanitizer that became nearly a “full-time job,” said Geng, noting the project may become a long-term one for the hand protection company.

“They really had to call dozens and dozens of companies to find any supply whatsoever,” he said of his staff. “That was a challenge.”

Implementing COVID-19 safety measures was another challenge. Staff were outfitted with cotton masks and were required to work at an appropriate physical distance, said Geng.

Superior Glove actually added staff during the pandemic to keep up to demand, swelling from 19 to 54. Plexiglas was installed between workstations and staff was divided into teams of eight with no intermingling.

The urgency of the situation pushed the rapid changeover. Typically, the changes would have taken six months to implement, said Geng.

“There’s that sense of urgency of like, ‘OK, we’ve got to ship. Because if we do, we’re protecting workers. And if we don’t, you’re not. You could potentially save a life if you ship this week versus next week.’ That sense of urgency and purpose behind things — that really helps you move and make things happen.” 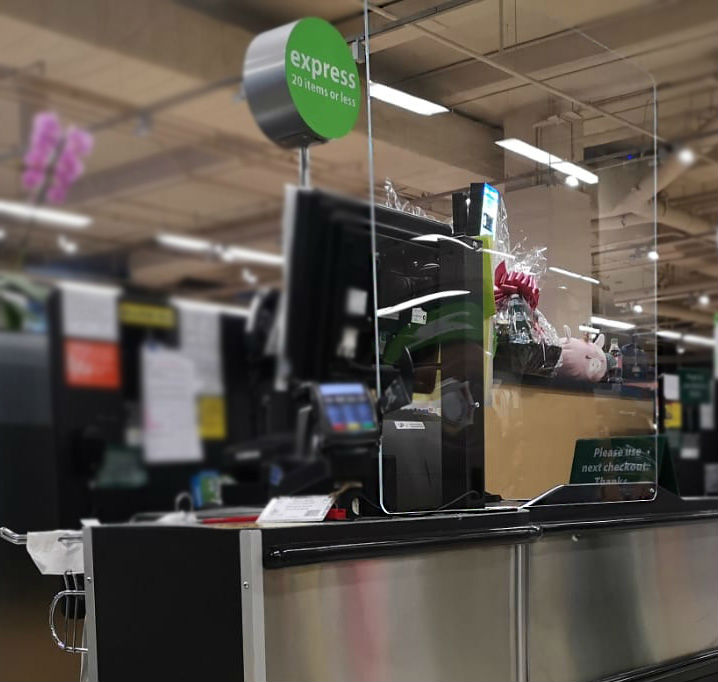 (Photo courtesy of Williams and White)

For Williams and White in Burnaby, B.C., the decision to assist others in the pandemic fit right in its operational wheelhouse.

In early March, the company decided to begin building protective barriers, before adding face shields and hand sanitizer to the mix, he said.

“Because we have a custom-manufacturing portion of our business, we just saw what was happening out there and we heard about stories in retail,” said Williams. “I thought, ‘Hey, wait a minute, we can help out with this, too.’”

“People were really scrambling at the very beginning of everything. Because we do custom production, we were able to just switch over to producing barriers for point-of-sale application. And then it just sort of grew from there.”

Williams and White’s decision came before the provincial government lockdown, he said. The company moved swiftly to build protective barriers for companies in B.C. and the United States.

The changeover was fairly standard for the custom company which already adheres to strict safety standards, said Williams.

“Guys are pretty used to switching over… We don’t have very many workers that are unskilled labour,” he said.

“The biggest thing that we had to do was adjust our policies for the COVID element,” said Williams of his staff of 40. “Distancing of people. We all wear face masks… all of our office staff work remotely. We have a skeleton crew in the office.” 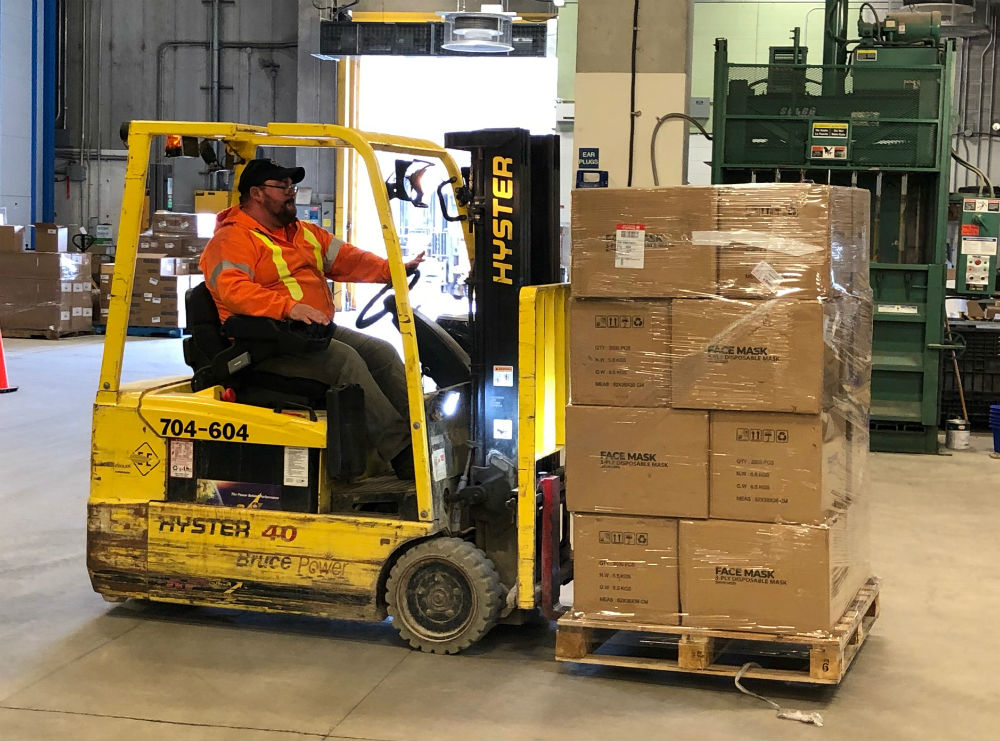 Not all Canadian organizations were able to retool in the fight against COVID-19. However, many still found ways to chip in.

The initial donation was from Bruce Power’s reserve, while the second was sourced material — with an assist from Levitt-Safety in Oakville, Ont.

“Some of that was inventory we had in stock and in reserve, and we have gone out and sourced a whole bunch of stuff,” he said. “We’re fortunate in that we have those supply chain connections with suppliers that allow us to get our hands on things that other companies and even health-care professionals might be having a hard time getting.”

“Companies go back to those during times of trouble like we’re in right now,” he said. “We felt like we have a responsibility as a large Ontario company to help out where we can, and we saw a real opportunity to contribute.”

“It’s hard for us to retool ourselves — we’re an electricity generator, first and foremost,” said Peevers. “(A donation) is where we thought we could make the biggest difference.”

The decision to donate was easy to make, he said.

“Obviously, we want to make sure we’ve got enough personal protective equipment for our own staff so that they can do their jobs. And then it was a matter of what do we have on hand? What do we need? What can we give right now to help? Because I think as you recall, the situation was pretty dire for some frontline health-care workers.”

The PPE was distributed to government and health facilities in Ontario, alongside many organizations in Bruce County. The effort was a source of much pride for all involved, said Peevers.

“It’s important that everybody do their part,” he said. “We’re all seeing that times like this bring out the best in people. And we’re seeing that all over in our communities and all across Ontario.”

This cover story was published in the May/June 2020 issue of OHS Canada.