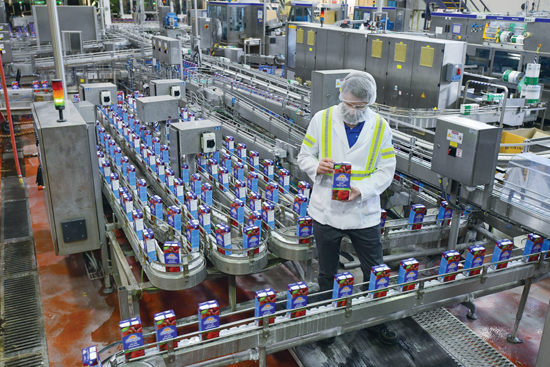 Safety is a key value at SunRype, which has spent 75 years producing fruit juices and snacks. (Photos courtesy of SunRype)

Every week, a group of managers at SunRype spend part of the off-shift walking through the company’s Kelowna, B.C., plant, doing a quick safety audit of the 143,000 square-foot facility to make sure that equipment is cleaned and locked out properly, and other safety protocols are followed.

Safety is a key value for the company that has spent 75 years producing fruit juices and snacks.

In 2013, SunRype achieved COR certification through the Manufacturing Safety Alliance of B.C. in recognition of the company’s robust health and safety practices.

But these weekly inspections by managers are a new initiative, born out of the pandemic.

Managers speak to employees once a week to screen them for COVID-19 symptoms, explained David Krell, the company’s director of operations. Instead of simply asking employees to fill out a questionnaire, the managers have one-on-one conversations with them.

“At the manager level, we’re interacting with the employees more than we ever have,” he said.

The safety tours developed out of these conversations; because the managers were already on-site, it provided a perfect opportunity for the inspections. “I think it’s gone a long way to improve the safety culture,” said Krell.

The desire to find better ways to bolster that safety culture is a hallmark of the company’s philosophy.

“Safety is not a destination,” said Lesli Bradley, the company’s president. “It’s something that you’re continuously working on, improving, modifying, tweaking and getting better day by day. We really believe it’s a journey of continuous improvement.”

For SunRype, these managerial inspections and increased conversations with employees are the latest steps in a journey of increased safety that has lasted more than 15 years.

A legacy of improvement

Since its founding in 1946, SunRype has been providing consumers with nutritious fruit snacks and juices, including the bestselling Blue Label, not from concentrate, apple juice.

Benefiting local communities is important to the brand that began when fruit growers bought two juice plants in Kelowna, B.C., and created BC Fruit Processing Limited.

To mark is 75th anniversary this year, SunRype announced it is partnering with Food Banks Canada to provide Fruit to Go snacks to school-aged children who don’t have healthy lunches during the summer.

The community loyalty exists in the company as well. More than 300 employees work at the plant. (The company also has two facilities in the United States.)

Many have worked at the Kelowna facility for 30 or 40 years, said Jane Williams, environment, health and safety manager for the company. “We have quite a tenure here.”

The downside of that familiarity is that it can foster complacency, and that complacency can cause danger.

“When a worker has been with a company for an extended period of time, we tend to forget, or we get used to the work processes — or sometimes we just act like we know it all,” said Jasmine Kalsi, an industrial hygienist with the Manufacturing Safety Alliance of B.C., the health and safety association for the province’s manufacturers and food processors, and the ones who determine which companies achieve COR status.

As employees repeatedly work with the same potential hazards they can “get comfortable,” she said. “Sometimes they minimize the risk. It can definitely lead to a risk for injury. Complacency and workplace injury can work hand-in-hand.”

In 2005, management at SunRype decided to respond to the high number of hours lost to work because of workplace injuries or medical leave.

The company spent six months conducting physical demand analyses on every task for every position, including office roles.

From those analyses, the company created an abilities management program for workers returning after an injury.

The goal was to give employees modified tasks so they could return to work as soon as possible, and in some cases, complete their recovery while also working, explained Williams.

“In the past, people would provide a (doctor’s) note that identified limitations,” she said. “We wanted to say: ‘Well, people are capable of coming to work — even in a modified capacity.’ So that’s why we focused on the capabilities of those injured people.”

Injured workers were given standard forms doctors could fill out. These forms were then cross-examined with the physical demand analyses to determine what tasks workers were able to do.

By 2007, the amount of time missed due to injury or medical leave had dropped by 34 per cent, Williams said.

“It’s really second nature. Everybody knows they need our form to go out to the doctor when they’re returning from surgery or medical leave,” Williams said. “It’s just the program that people know and participate in.”

“I don’t think we could comprehend going back to the same level of missed days that we had before,” added Krell.

Modified tasks and gradual returns to work are the norm for all positions at SunRype, whether that be for factory workers, schedulers, or managers and supervisors, he said.

While the abilities management program created significant benefits, workplace safety seemed to hit a plateau in 2008 and 2009.

“We needed something to reinvigorate our program,” said Williams.

The company’s joint health and safety committee recommended to management that the workforce be trained in behaviour-based safety.

Behaviour-based safety focuses on workers’ individual habits and how their actions, or inactions, may be putting themselves in an unsafe situation.

“It’s coming to recognize where you may be becoming complacent and, as a result of that, maybe putting yourself at some level of risk,” said Bradley.

In 2013, SunRype achieved COR certification through the Manufacturing Safety Alliance of B.C. in recognition of the company’s robust health and safety practices.

It can be as simple as reminding workers to hold the handrails when they’re climbing up and down stairs and to only take them one stair at a time, noted Krell.

“All of the engineering is complete: the stairs are safe, they have handrails, they have the proper treads; everything has been done. That is an example where it’s completely up to the employee to take care of their own safety.”

Training all company employees with Safe Start — the curriculum the joint health and safety committee recommended — took a year. It’s also a part of the onboarding process for new hires, said Bradley.

The training led to an initial 42 per cent decrease in time missed because of injury, and the principles continue to be a regular part of the culture at SunRype more than a decade later.

“Employees are now comfortable approaching other employees and they’re talking about it,” Williams said. “They’re reminding them to practise the Safe Start principles. You see a positive safety culture. It shows that everybody cares about everybody in the facility.”

Each month, SunRype audits different parts of the operation, and then each year completes a comprehensive safety audit, as required through the COR certification. Every third year, an external auditor conducts the safety audit; during the other years, a trained SunRype employee does it. Employees participate in surveys about company culture every couple of years.

“We want to ensure that every person who works in this organization understands our commitment to health and safety, the basis of those programs, and knows that it’s everybody’s responsibility to know, understand and work within that framework,” said Bradley, describing the goal of the COR audits.

Confidential employee interviews with representatives from all departments are the bedrock of these annual reviews, explained Kalsi.

These interviews are a way to determine how well employees understand a company’s safety procedures.

They ask: “Is this something that is actually being done? Is it being interpreted by the workforce itself?” she said. “Do employees actually know about it, or is it just fluff on paper?”

Strengthening communication during the pandemic

The pandemic’s greatest impact on occupational health and safety was that it shut down any training sessions in large groups, said Krell. Now, supervisors and managers have quick meetings with all the employees at the start of each shift.

“Those are actually a really good venue to get safety information to each of the employees, and then to get feedback and safety concerns from the employees,” he said.

The personal conversations with each employee during screenings for COVID-19 symptoms have also been a great benefit.

“We won’t stop doing it,” she said of the conversations.

“It’s improved our safety program. It was born out of necessity, but it will live on because it’s a good practice.”

This case study was originally published in the July/August 2021 issue of OHS Canada.


Related
How to keep your employees engaged in health and safety
Best practices for achieving a holistic safety culture
CCOHS scholarship celebrates women in occupational health and safety
What lasting effects will COVID-19 have on worker health, safety?