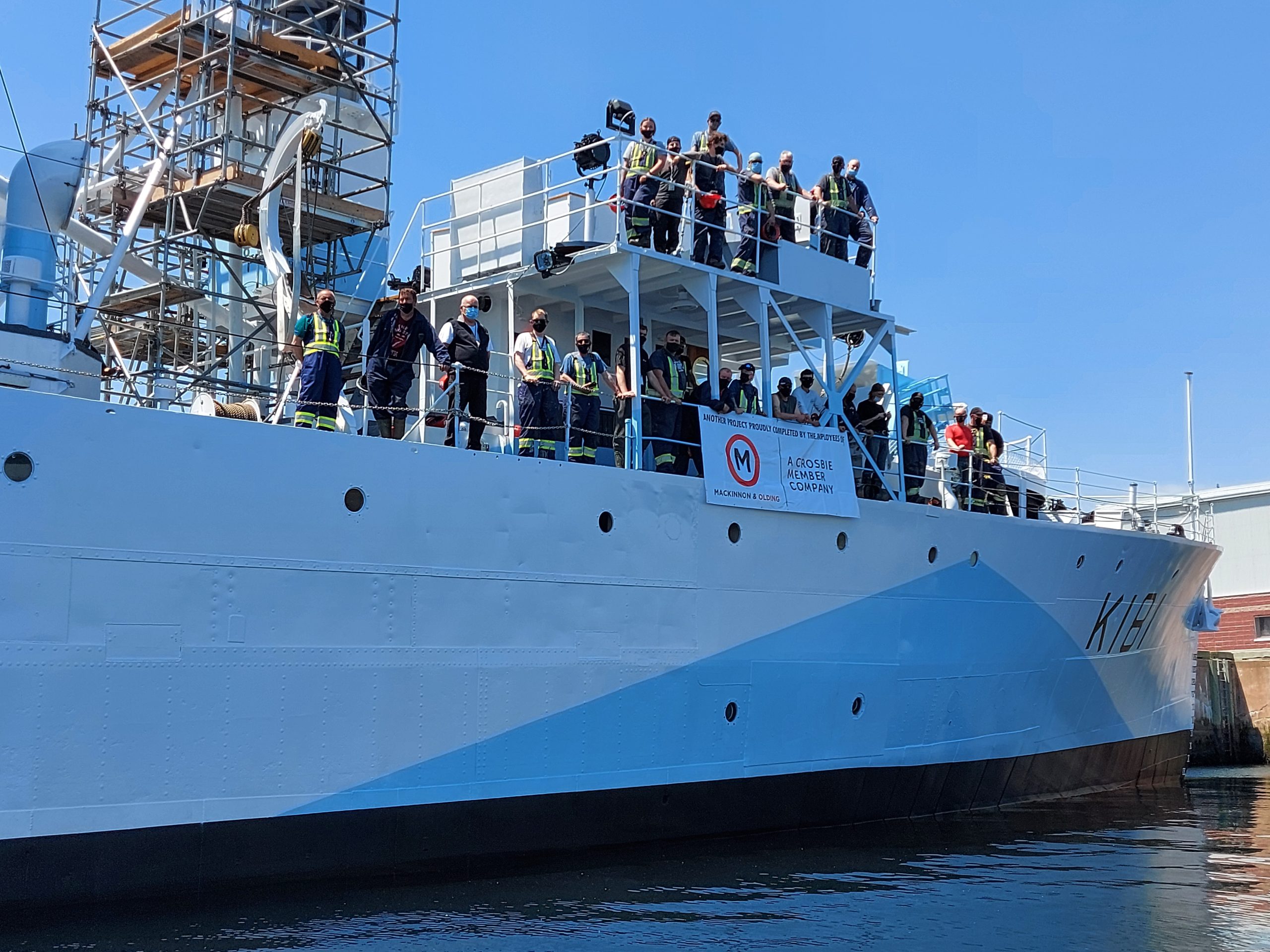 A MacKinnon & Olding crew on board the HMCS Sackville, which is Canada’s oldest warship. It’s now a museum ship, which the company painted back to its original colours.

MacKinnon and Olding is approaching a safety milestone, knocking on the door of going three years without a single lost-time injury.

For the marine and industrial contractor, based in Dartmouth, N.S., building a strong safety culture has taken years of work — and president Scott MacKinnon credits teamwork for getting to this point.

“It’s not just management, enforcing policies that we develop on the workforce,” he said. “We take the ideas from the workers on the ground floor and will implement them into policies that we use to drive the whole culture.”

Stacia Baldwin, manager of HSEQ, described the philosophy as a proactive, ongoing approach.

“Everything we do is an attempt to reduce the amount of time we have to be reactive,” she said. “We also recognize that safety is ever evolving. It’s not one and done — you write a program, and then you leave it.”

The company suffered the absolute worst-case scenario in July 2019 when one of its workers, Trevor O’Neil, was killed in an explosion at the Halifax shipyard.

“In my 30-year career, it’s definitely the worst day I’ve ever had,” said MacKinnon. “If you ask any business owner what their biggest fear would be, it would be a fatality.”

The company’s road to building a strong safety culture started before that incident, but the tragedy put a spotlight on the importance of safety and why the company was preaching it, he said.

“This is why we’re doing all this stuff,” said MacKinnon.

Big changes in a decade

Baldwin said the company is always pushing to improve, and has come a long way over the last decade. One of the questions OHS Canada posed to the team was what it looks like to walk into an organization with a strong safety culture.

“I really liked this question, because this is something Scott says all the time,” she said. “He often says, ‘Could you imagine us 10 years ago, we would never have envisioned ourselves being where we are today.’”

MacKinnon said some of the signs are literal — when you walk into a work trailer today or the lunchroom, everything is labeled. There are company policies, rules, specific forms you need to fill out and a safety bulletin board.

“I remember, not too long ago when I used to work, you turned over a five-gallon bucket and that’s where you ate your lunch,” he said.

Now, there’s much higher awareness of safe practices, and hazards are reported regularly.

“It’s corrected, and not by senior leadership, it would probably be corrected at the employee level before it even got to that,” said MacKinnon.

Safety is discussed every single day, he said, and the best way to describe it is an attitude change.

“Ten years ago, safety might not even come up during the day unless you were in trouble,” he said. “Now, it’s used as a means of looking out for everybody”

Baldwin said the biggest change she has seen in consistency. Days start with toolbox talks, the risks involved in jobs, inspections of PPE.

“It’s really about the routine,” she said.

A decade ago, workers might have scurried when she showed up at a job site.

“Whereas now, when people see the safety co-ordinators come on site, they come towards us and ask questions,” said Baldwin. “They bring suggestions.”

Young workers have been a strength in enforcing safety, because it’s all they know, said MacKinnon.

“They don’t know the old school, the bad habits,” he said.

Employees joining the organization go through a rigorous training process, including safety courses — and they’re encouraged to speak up when they get on the job, said Baldwin.

“Young people coming in, that are fresh out of training, have fresh perspectives,” she said. “We want them to share that, and educate the people who are more experienced.”

As the company approaches the three-year milestone, Baldwin and MacKinnon both said they’re proud of the fact that every incident gets reported. There’s a risk to putting a spotlight on that number, they said.

“It can encourage a lack of reporting,” said Baldwin. “But we get lots of reporting. People are often even saying, you know, I had a minor cut today. We want to have that on record.”

MacKinnon likes that employees are upfront and open about safety.

“Our reporting is much more accurate, and has more detail,” he said.