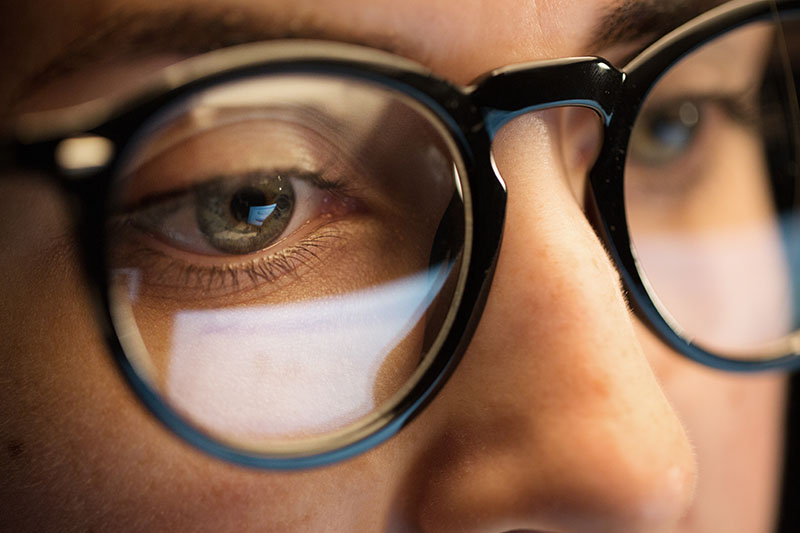 Lea hated 2020. She missed out on a high school graduation ceremony, a class trip to Spain and her graduation dance. She was also deprived of the excitement that came with starting college — the welcome parties, living her first moments of adult life, taking responsibility for her career and life choices — and just having more freedom.

Instead, Lea spent hours staring at her tablet and her computer, whether it was to do online courses, watch a TV show like Pandemic or catch up with her friends. The year ended in a blur — not the blur of an uncertain future, but a very real, tangible blur. Today, whenever she tries to read, work or concentrate for long periods of time, her eyes become watery, strained and hot. She has a migraine headache by the end of the day. That’s what made Lea decide to consult an optometrist for the first time in years.

Prior to 2020, Lea’s vision had seemed perfect, although asymptomatic might actually be a more accurate description. Today she worries about changes and fluctuations in her vision, and wonders what’s causing these problems. She is even mulling over the idea of launching a class action lawsuit, realizing that she is not the only one whose vision is suddenly deteriorating. Some authors are calling this a public health issue. Even Martha Stewart claimed the pandemic was causing an outbreak of vision problems.

There have always been patients like Lea, but I can confirm that in both my university and private optometry practices there have been more cases like this since the lockdowns started. Is there a cause and effect relationship?

A syndrome exacerbated by the pandemic

On the surface, Lea has the symptoms of computer vision syndrome or digital eye strain. Although there are no in-depth studies on this subject, one interesting article quotes a survey of 10,000 people that found nearly 65 per cent of the population that uses computers or other screens suffer from digital eye strain, and that it affects women, in particular.

A survey like this is based on self-reported symptoms and does not include objective measurements. It asks respondents about eye fatigue, migraine headaches, blurred or fluctuating (momentarily) vision, dry eyes, neck and shoulder pain. This type of study suggests associations but does not clearly establish causal links.

To understand why these symptoms have appeared, it is important to understand that when eyes are looking at a computer they are working the same way they would while reading a book or staring at a landscape. Using our eyes more, as we have during the pandemic, often brings out an underlying defect that was already present.

For the visual system to work properly, the vision of each eye must be optimal and clear. The images acquired by both eyes (binocular vision) must then be appropriately combined.

For vision to be clear, the eye must be free of optical defects. Any defects must be properly corrected, but this doesn’t always happen. A large proportion of eyeglasses and contact lenses do not make the proper corrections, particularly when wearers have ordered glasses online. One American study concluded that almost half of the glasses ordered online have errors in the prescription. Eyeglasses ordered online are often poorly centred, which can cause symptoms very similar to those described by Lea.

The first thing to do when you notice that long periods looking at screens are causing eye pain, is consult an optometrist, have your vision checked and verify that the proper correction has been made. Eyeglasses wearers are often offered anti-blue light filters. To date, these have not been shown to be effective in reducing visual symptoms.

However, they are highly recommended for teenagers because they reduce the negative impact of late-night screen exposure on the circadian rhythm. They may also protect against blue light toxicity in retinal cells, especially for smokers. Limiting teenagers’ screen use to two hours before sleep is one of the best things you can do, although this can be difficult to do!

How to create a comfortable workspace at home

It’s also important to test how eyes work together. Generally speaking, your eyes converge more when you are reading since you look more towards your nose. This is a natural, normal movement. However, one person in five or six has convergence insufficiency. Those affected by this problem have difficulty maintaining functional and comfortable vision at a normal reading distance (33-40 centimetres). Smart phones and tablets are viewed at an average distance of 18 centimetres. So there’s a problem!

The change in distance makes the visual system work much harder, especially since screens are small and poorly lit. A jogger who easily runs five kilometres in the morning will not necessarily be able to run a 42-kilometre marathon, without additional training. In the same way, eyes that converge properly at a longer distance may not at a shorter distance, especially when this extra effort is maintained for long periods.

Optometrists can use a series of tests to evaluate binocular vision, then propose exercise therapy (orthoptic or motor) if necessary. Training the muscles of the eye for a few weeks also makes it possible to optimize the integration of images in the brain, and therefore perception. That, in turn, makes the whole oculo-visual system more efficient.

The optometrist will also recommend keeping tablets, computers or telephones at a proper distance while reading them, generally, 33-40 centimetres for adults. For children, the distance should be the length of the forearm. The optometrist should also discuss the device’s lighting (using filters to reduce brightness and short wavelengths) and talk about ambient lighting (avoid cool LEDs and use fluorescent lights or warm LEDs). Here again, short wavelengths (blue) should be minimized.

Another important thing to consider is the relative dryness of the eye while viewing a screen. Tears cover the eye to protect, nourish and keep it moist. They also ensure that the ocular surface remains uniform, which guarantees better vision. Tears are a refractive surface, which influences the patient’s vision, so an unstable or rapidly evaporating tear film automatically leads to impaired vision.

However, when we work on a screen, our blink rate is significantly reduced (three times less). The tear film does not renew itself regularly, but evaporates and the eye dries. This chronic dryness leads to vision that fluctuates between clear (wet eye) and blurred (dry eye) periods. In contrast to dry eye syndrome, this type of dryness causes less discomfort (it may feel like there’s sand in the eyes) but can generate redness and warmth. Indeed, any dryness is likely to cause inflammation.

The intuitive approach to treating this condition would be to add artificial tears to the eyes, but this may only have a short-term effect. Restoring a normal blinking rhythm (15 times per minute) is a better alternative. There are now apps that remind you to blink. In more severe cases, the optometrist may prescribe treatments such as massage and applying warm compresses to the eyelids, or prescribe medication to reduce inflammation.

Lea’s examination revealed an “accommodative spasm” (uncorrected hyperopia, linked to a spasm of the internal muscle that allows the eye to focus close-up) and a slight lack of convergence. These defects in her vision will be corrected with glasses for reading or working on a screen and, if necessary, some exercises. I also gave her ergonomic advice on staying the correct distance from her screen, telephones and so on; told her how to illuminate her environment and adjust the screen brightness and suggested she take frequent breaks and blink often.

I also reassured her that her problem is not her computer, but that she uses it too much, given her underlying visual condition, which was probably present before, but not detected.

As I walked her back to reception, I noticed that my next patient was waiting with her 18-month-old daughter who was staring at a smartphone held 10 centimetres from her nose. Yes, another parent who needs to be reminded that exposure to any screen before the age of two is ill-advised, except for short video chats with grandparents, and only under supervision.

Go outside to play and have fun with your child the old-fashioned way. Their eyes will thank you for it! Make the choice to live your life on that big screen called nature instead of on that small one in your living room!

Langis Michaud is Professeur Titulaire, Ecole d’optometrie, Expertise en sante oculaire et usage des lentilles corneennes specialisees, at Universite de Montreal. He does not work for, consult, own shares in or receive funding from any company or organization that would benefit from this article, and has disclosed no relevant affiliations beyond their academic appointment.