Analyzing the data behind workplace spread of COVID-19 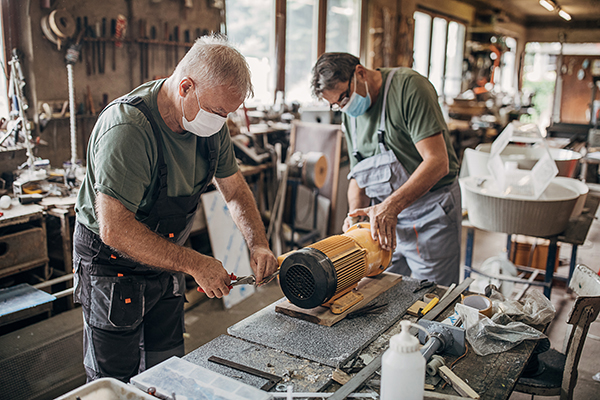 Data shortcomings make it difficult to have an accurate picture of the role workplaces played in COVID-19 spread. (South_agency/Getty Images)

From the very start of the pandemic, measures enacted by public health authorities signalled their recognition that workplaces could be important sites of COVID-19 transmission.

Yet, such recognition was not backed up by consistent data collection to understand how workplaces compared to other sites of virus spread, Institute for Work & Health (IWH) senior scientist Dr. Peter Smith said in a recent webinar presentation.

As a result, he noted, it was challenging during successive waves of community spread to have an accurate picture of the role of workplaces in adding to case counts.

As well, the system missed opportunities to drill down and uncover factors that may be behind COVID spread in certain workplaces and not others.

The studies gave rise to findings that may surprise some, considering the heightened concern voiced in the media about work as a source of transmission during Ontario’s second and third waves.

One finding was the widespread adoption of COVID-19 infection control measures.

In a large, nationally representative series of surveys conducted by Statistics Canada, 75 per cent of respondents who continued to go to work reported four or more infection control measures at their workplaces. Another 15 per cent said their workplaces had three such measures in place.

A very small proportion said their workplaces had no infection control measures in place.

“Two per cent of approximately 11 million people (the number of Canadians estimated to have continued to go to work) is 220,000 people, and that’s still quite a lot of people,” said Smith.

Workers who lacked such protection (or had only one form of protection) were more likely to be new on the job, working part-time, on contract, or in sectors such as construction, utilities and agriculture/mining/quarrying/oil.

A second notable finding related to the level of transmission attributable to work?

Over a year-long period between April 1, 2020, and March 31, 2021, workplace outbreaks accounted for about 12 per cent of all cases, and seven per cent of all hospitalizations among working-age Ontarians.

These findings are much lower than what the public perceived during some of the most anxious periods of the pandemic, when cases among workers were reported to be “driving the pandemic.”

The three sectors where workplace infection rates were consistently higher than general rates were agriculture, health care and social assistance, and food manufacturing — which is consistent with media reports spotlighting the heightened risks in these
sectors.

Looking at rates of transmission together with use of infection prevention measures, Smith pointed to different outcomes in industries that should theoretically have been more similar.

“This points to some of the missed opportunities for learning when it came to workplace outbreaks,” said Smith.

“We haven’t done enough in collaboration with public health to really understand why the COVID virus seems to spread in some workplace settings much more than others. It’s not just about access to infection control procedures. Other characteristics of the environment must be important.”

Referring to workplaces that had extremely large outbreaks with case numbers in the hundreds, Smith asked: “What was happening in those particular settings that wasn’t happening in others?”

“We missed opportunities throughout the pandemic to answer questions like these. And we certainly need to set up systems for the next pandemic so we can access information needed to more quickly get answers.”

The first of the studies Smith presented was based on data collected by Statistics Canada between July and September 2020, in a special supplement to the Labour Force Survey, that included questions on COVID infection control measures at worksites.

After Smith and his team removed answers from people who were self-employed or who worked from home, they had a sample of about 53,300 responses.

Survey participants were asked about a range of workplace practices, including practices that allowed for physical distancing; or access to masks, face masks, gloves and gowns, for example.

Smith noted that potentially important infection control practices such as ventilation were not asked in the survey. That’s a reflection of the timing of the survey, which took place before the importance of ventilation was widely recognized.

The vast majority of respondents said their workplaces had infection prevention policies in place.

These included physical distancing (84 per cent), personal protective equipment (88 per cent), handwashing (91 per cent) and cleaning (86 per cent).

Given the heightened risks of transmission faced by workers in health care and social assistance services, it was to be expected that this was the sector with the most prevalent use of PPE.

However, in terms of physical distancing, other sectors such as manufacturing, wholesale trade, retail trade and accommodation and food services, and service industries all had more widespread use of distancing. Notably, distancing was markedly low in construction and transportation and warehousing.

“Interestingly, we saw no differences between unionized and non-unionized workers, and no differences across racial/immigrant groups or across hourly wage levels,” said Smith.

For the second study, on rates of workplace transmission in Ontario, Smith and the research team used the number of workplace outbreaks, defined by Public Health Ontario in most sectors as instances when two or more cases were detected in a workplace over a 14-day period, and a link could be established between the cases.

Smith noted, however, that this definition was not used uniformly across sectors, especially at the beginning of the pandemic (for example, single cases were considered outbreaks in long-term care homes and child-care settings). Public health units across the province could also vary in how vigilant they were in identifying and following up on workplace outbreaks.

Despite the inconsistencies, outbreak data did provide an opportunity to identify the types of workplace settings where the cases did occur — something not available in the absence of routine collection of work information by the health system.

Uyen Vu is a senior communications associate at the Institute for Work & Health in Toronto.

This feature story was published in the Nov/Dec 2021 issue of OHS Canada magazine.