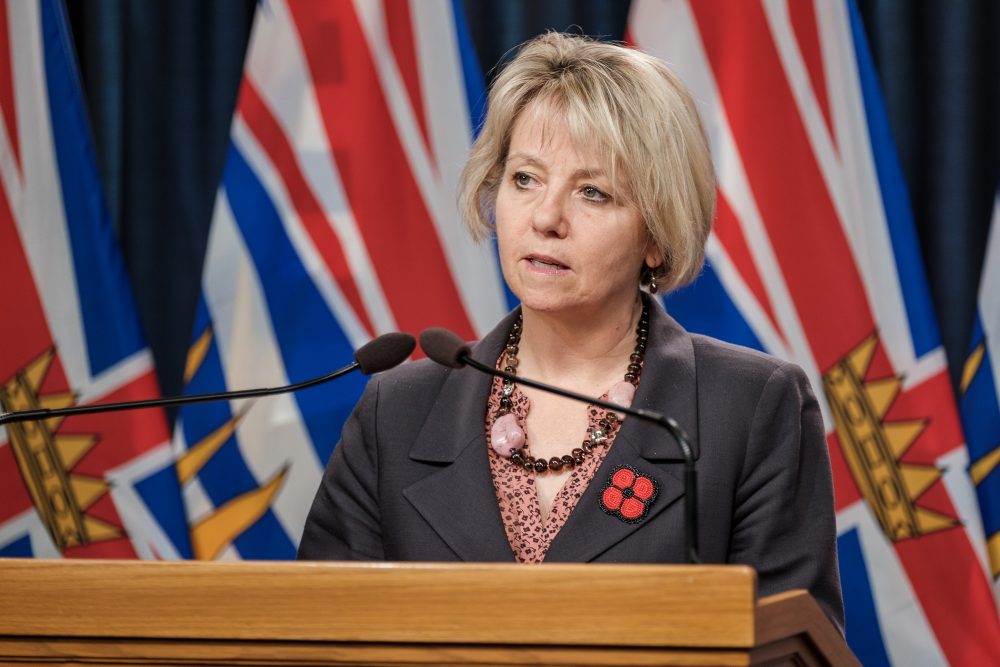 B.C. health authorities clamped down on COVID-19 measures Monday as new cases in the province spike and the race against variants becomes increasingly dire.

“During the past week, case counts have risen unacceptably high,” Horgan said.

“In fact, (they are) higher today than at the worst point of the second wave between November and January of this year, the percentages of tests coming back positive has gone up by 50 per cent, and the number of variants has also increased,” he added.

Over the weekend, 2,518 new cases of COVID-19 were reported, with 321 of them being variants of concern. And six more people died from the virus during the three-day period.

A total of 2,233 variant cases have been identified and 413 cases are active at this moment, Henry said, adding most of the cases are the U.K. variant.

“We know that this is a variant that is much more transmissible, and we’re getting more and more evidence it leads to more serious infections in younger people,” Henry cautioned.

The new measures go into effect as of midnight.

As well, Henry ordered the Whistler Blackcomb Ski Resort closed due to a renewed climb in cases at the destination location.

Schools also got a new public health missive, recommending students in Grade 4 and up wear masks while at school — a move long called for by the BC Teachers Federation.

And anyone who could work from home, should do so, Henry added.

“In the last six days, we’ve seen the start of exponential growth in new cases. We’ve seen more hospitalizations, and more people requiring critical care, and the strain on our acute care systems is ramping up,” Henry said, adding not enough of B.C.’s population has been vaccinated to date to keep communities safe.

“A circuit breaker is now required to break the chains of transmission in our province and allow us to safely move forward through this next phase,” she said.

Transmission of the virus in indoor settings was posing the greatest risk, Henry said.

However, Henry did not close schools, or small retail stores and personal services such as hair salons.

She also didn’t revoke a recent measure allowing people to gather in a bubble of the same 10 people in outdoor settings, noting these meetings are not driving the spike in cases.

Henry reiterated the need for people to not travel outside their home community.

“We know that people have taken advantage of the weather and the March break to go places with their family,” Henry said. “What that has meant is that we’ve seen a rapid rise of cases of people that have returned to their home communities.”

Over the weekend, Island Health recorded 142 new cases of the coronavirus.

That followed Friday’s new daily record of 55 new cases in the region. The province also recorded its second-highest single day total, with 908 cases — 140 of which were variants of concern.

The region is experiencing a higher number of cases of the virus, with individuals affected reporting more social contacts and event participation while infected, Island Health said.

“Accordingly, we are now seeing the number of children with coronavirus on the rise,” the health authority said.

“All signs indicate that there will be significant numbers of exposures at schools in the weeks to come.”

Children with symptoms, no matter how mild, should not attend school and should get tested, especially if they travelled during spring break, Island Health said.

Small, isolated island communities are holding their breath, or breathing a sigh of relief, depending on whether the vaccination program has rolled out in their area.

“It was a mixed bag and not what I wanted to hear,” Abram said Monday, noting residents on the small island still have not received vaccinations through Island Health’s whole-community approach.

Abram had hoped for a “real” two-week circuit breaker that involved a complete shutdown of all travel, schools and businesses, a move that has been successful in other jurisdictions or countries, he said.

“When you throw a circuit breaker, it’s either on or it’s off,” Abram said. “So which is it? It’s not something in between.”

While Abram is happy with measures to eliminate indoor dining in restaurants and pubs, it appears people can still gather on patios, he noted.

People in B.C. are also ignoring the long-standing call not to travel outside their communities, he said.

“And (the province) didn’t mention a thing about interprovincial travel. That was a big disappointment,” Abram said.

“They are going to slow transmission of the virus by what they’re doing, but it’s not going to stop it.”

Cortes Island residents aged 18 and up got their first shot of Pfizer vaccine on Thursday.

Approximately 700 doses were administered, and a waiting list had to be established for another clinic because the vaccine uptake by the community was so strong, said Cortes regional director Noba Anderson.

While there is some sense of relief and hope — especially in light of rising case numbers — it’s not time to celebrate or ease up on pandemic protocols, said Anderson.

“I’m feeling very privileged and grateful that Cortes was in the early rollout of the vaccine effort,” Anderson said.

“But we’re not getting any public health communications about this being an invitation to lighten up in terms of (COVID) precautions at all.

On Monday, Henry also said the use of the AstraZeneca vaccine in adults under the age of 55 will be paused temporarily as the province conducts a review after a rare response to it was detected in young people in Europe.

“It is unlikely we will see any cases here in British Columbia, or in Canada, but it is also a condition that we have a test for and there’s treatment,” said Henry, who did not outline what the concerns are.

Henry said anyone who had an AstraZeneca vaccine more than 20 days ago has no cause to worry.

And anyone with symptoms as outlined by the BC Centre for Disease Control can seek medical attention, Henry said.

Overall, studies show the vaccine is safe, and it is an important tool in the global response to the virus, Henry said, adding more information from the review will be provided as soon as it is available.

Horgan stressed that British Columbians have made great progress overall in taking the necessary actions to protect collective health.

But despite the progress and hope associated with the vaccine program, people ?— especially those aged 20 to 39 — have to redouble their individual responsibility for the greater good and curtail social activities, he said.

“My appeal to you is: Do not blow this for the rest of us,” Horgan said.

“Do not blow this for your parents, and your neighbours, and others who have been working really, really hard (and) making significant sacrifices so we can get good outcomes for everybody.”